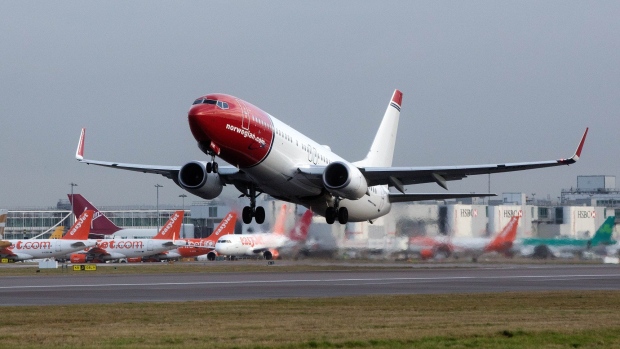 Norse Atlantic Airways aims to start operations by year-end, according to a statement Monday. It is 53% owned by shipping entrepreneur Bjorn Tore Larsen, whose company OSM Aviation provided flight crews for Norwegian Air before the carrier filed for insolvency.

Larsen will serve as chief executive officer of Norse Atlantic, while Norwegian Air founder Bjorn Kjos and former chairman Bjorn Kise own 15% and 12% of the new company’s shares.

Norse Atlantic will begin service in December with nine leased Boeing Co. 787 Dreamliner jets, the same model that Norwegian Air deployed on trans-Atlantic services, according to the statement. The discount carrier’s rapid push into trans-Atlantic flights rattled competitors, but left it with too much debt from hundreds of aircraft orders and splurges on new routes.

Norwegian Air is now seeking to reorganize under Irish insolvency laws. It has largely ditched long-distance flights and has said it will focus on regional routes in Europe.

Norwegian Air agreed to take a 50% stake in OSM Aviation in December 2015. At the time, the business employed more than 2,300 people in 14 countries. As the airline sank into distress last year, it brought its flight-crew units fully in-house.

Norse Atlantic said it will serve only profitable routes linking destinations such as New York, Los Angeles, Miami, London, Paris and Oslo, and that services to Asia could follow.

It plans to list in Oslo and has a valuation of $24 million, it said. A number of airline startups have formed during the pandemic, attracted by the potential for a rebound in air traffic and lower competition in some markets.