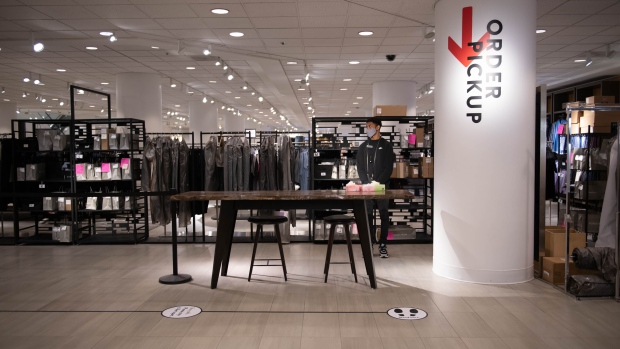 Social distancing markers on the floor near the order pickup area at the Nordstrom flagship store in Seattle. Photographer: Chona Kasinger/Bloomberg , Bloomberg

Nordstrom Inc. reported a sharp drop in holiday sales, but the worst could be behind it as it says demand has continued to strengthen in the new year.

Net sales tumbled about 22 per cent during the nine-week holiday period ended Jan. 2 compared to last year. The company, which operates both the high-end Nordstrom chain and discounter Nordstrom Rack, said its November and December sales were in line with expectations for the fourth quarter.

The department-store sector had a difficult 2020, with store closures and demand for more online fulfillment driving shoppers to websites like Amazon.com Inc. and Walmart Inc. Nordstrom was able to pick up more digital shoppers this holiday, too, accounting for 54 per cent of total sales compared with 34 per cent from the same period in 2019, but incremental customer spending went disproportionately to online and big-box retailers this season.

Still, December sales were up from November levels, “with momentum continuing into January,” it said in a statement.

Nordstrom shares fell as much as 5.2 per cent after the close of regular trading.