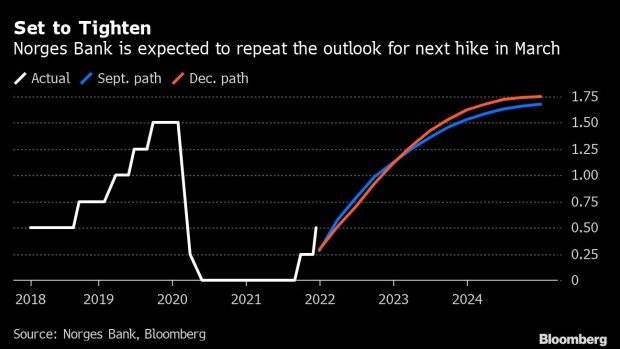 The Norges Bank, Norway's central bank, stands in Oslo, Norway, on Wednesday, March 25, 2020. Norway will extend drastic measures imposed to limit the spread of coronavirus for three weeks, as the number of confirmed cases continues to rise and the richest Nordic economy keeps slowing down. , Bloomberg

(Bloomberg) -- Norway’s central bank is set to keep interest rates on hold on Thursday and reiterate the outlook for a March increase in its last decision under outgoing Governor Oystein Olsen.

Analysts will be looking for clues on whether Norges Bank is considering more rate hikes this year than flagged last month on recent robust economic data. The benchmark deposit rate is expected to stay at 0.5%, according to all 15 economists surveyed by Bloomberg.

The richest Nordic economy on a per-capita basis has weathered the pandemic better than most, prompting the central bank to start removing stimulus last September -- ahead of other managers of major currencies.

The rate meeting will be the last in Olsen’s 11-year term. His successor at the helm of one of the most hawkish monetary authorities could be named in coming days after a race mired in controversy.

Expectations for a 25 basis point increase in March and as many as three more hikes this year have firmed up in recent weeks.

“Developments have been better than Norges Bank expected, and they will emphasize that,” said Dane Cekov, an Oslo-based economist at Nordea. “It’s rather difficult to see what they will bring forth to balance the statement on the negative side.”

Norway’s faster-than-expected inflation and low unemployment have reduced concerns that the recovery could be derailed by a return to a partial lockdown last month to fight the spread of the omicron variant.

The consumption-led economic rebound is helped by record stimulus from Norway’s $1.4 trillion sovereign wealth fund and by exports breaking all-time-highs in past months partly due to Europe’s energy crisis.

While infections in Norway are at a record, the government scaled back some of its Covid-related restrictions last week with hospitalizations low. Prime Minister Jonas Gahr Store said the country now needs to learn to live with the virus.

Olsen’s early departure, announced in August, prompted a search for a successor that’s been tinged by concerns over the central bank’s independence. Analysts have been divided over whether the decision could have any implications for monetary policy, with most expecting no significant effect.

Jens Stoltenberg, secretary general of the North Atlantic Treaty Organisation and a former Norwegian premier, is vying for the job amid a backlash from the media and opposition due to his close ties to Gahr Store. His rival for the role is Deputy Governor Ida Wolden Bache, who would be Norges Bank’s first female chief. The appointment could happen as soon as on Friday.