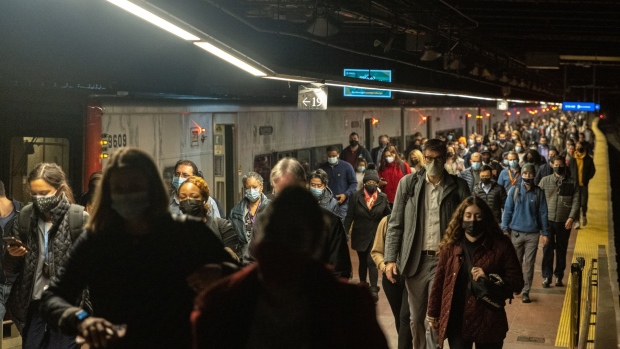 The mixed picture of the U.S. labor market that emerged in 2021 isn’t going anywhere this year.

While the unemployment rate has been falling for months, the labor force participation rate has barely budged. Wages are rising, but not enough to offset inflation. Job openings remain well above pre-pandemic levels and employers are struggling to find qualified workers. And the virus itself continues to disrupt child care arrangements and raise health concerns, keeping many Americans on the sidelines.

Most of those trends are expected to linger into at least the first half of 2022, but economists are hopeful that -- if the virus is under control -- labor supply will start to normalize later this year.

Government figures Friday are projected to show that employers added 433,000 workers at the end of 2021, the median estimate in a Bloomberg survey of economists. The labor force participation rate is forecast to tick up to 61.9 per cent, still well shy of the 63.4 per cent seen before the pandemic.

The survey period for the jobs report ended mid-month, so it’s doubtful the omicron variant of the coronavirus had any significant impact on the labor market in the latest data.

“We’ll know whether we’re on the right track in the first few months, though January may be bit of an issue with omicron,” said Brett Ryan, senior U.S. economist at Deutsche Bank Securities Inc. “It may take until the summer to get a grasp on whether the labor market is fully healed, to get a sense of how close we are to full employment.”

Here’s what may be in store for various aspects of the job market in 2022:

The labor force participation rate -- the share of Americans that are either working or looking for work -- was mostly stagnant in 2021.

While some of the factors that have been keeping Americans from re-engaging in the job market could abate in 2022, concerns about the pandemic itself will continue to hold back many job seekers, said Nick Bunker, economist at Indeed Inc. Child care responsibilities will also keep some people from seeking a job, he said. 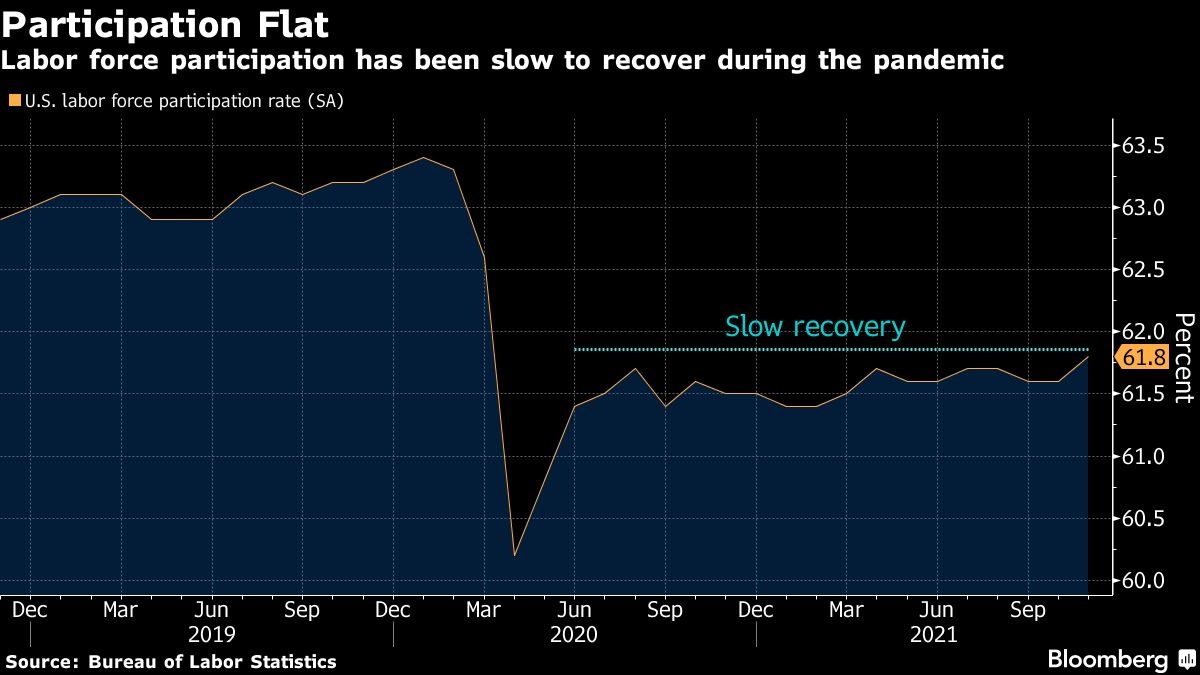 There is another reason for the sluggish rebound in participation: many older Americans have retired over the last two years. “This is a big chunk of missing workers that we don’t think will come back,” said Sarah House, senior economist at Wells Fargo & Co.

One difference in 2022 compared with recent years could be that larger-than-usual financial cushions -- due to generous government stimulus and unemployment benefits -- fade as households spend down savings. That’s seen encouraging some sidelined workers to seek employment.

Economists anticipate solid payroll growth this year, but “we’re probably not going to see the large monthly increases that we did this past year as the pool of unemployed people has certainly shrunk,” Ryan said.

At the start of 2021, the labor market was nearly 10 million jobs short of pre-pandemic levels. Now, there are fewer than 4 million jobs left to recover. 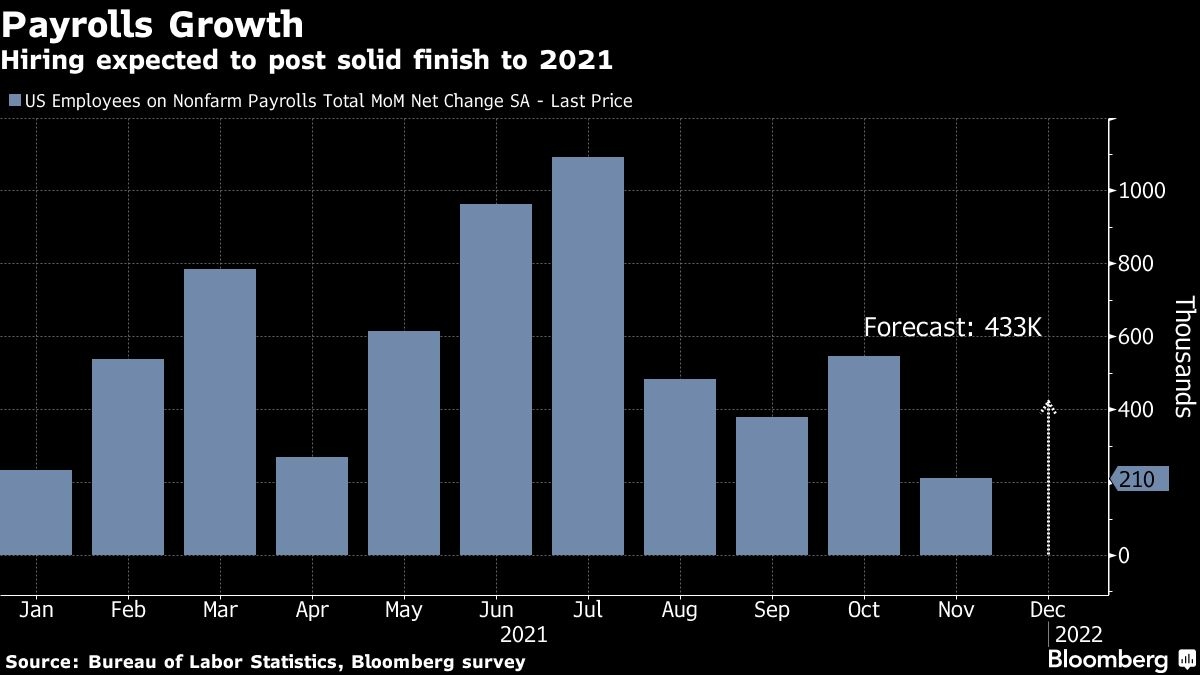 The leisure and hospitality, health care and education sectors are expected to drive payroll gains in 2022, as those sectors have the most room to make up in returning to levels seen in February 2020. Those are also the industries most impacted by rises in coronavirus infections, so progress on the pandemic will play a major role in their recovery.

“There’s still a lot of uncertainty about the pandemic and how the public health situation is going to evolve,” said Daniel Zhao, senior economist at Glassdoor Inc. “Progress on the pandemic is substantial but it’s clear that the pandemic is not fully under control yet. That’s going to take time.”

With job openings expected to remain elevated due to high demand for labor, Americans who are actively looking for work are expected to find jobs relatively quickly.

As more people move into private-sector jobs, the unemployment rate is likely to fall below the Federal Reserve’s “estimate of a full employment economy” by early this year, Stephen Stanley, chief economist at Amherst Pierpont Securities LLC, said in a note.

Economists currently expect the jobless rate to fall to 3.6 per cent by the fourth quarter, near the decades-low of 3.5 per cent prior to the pandemic. 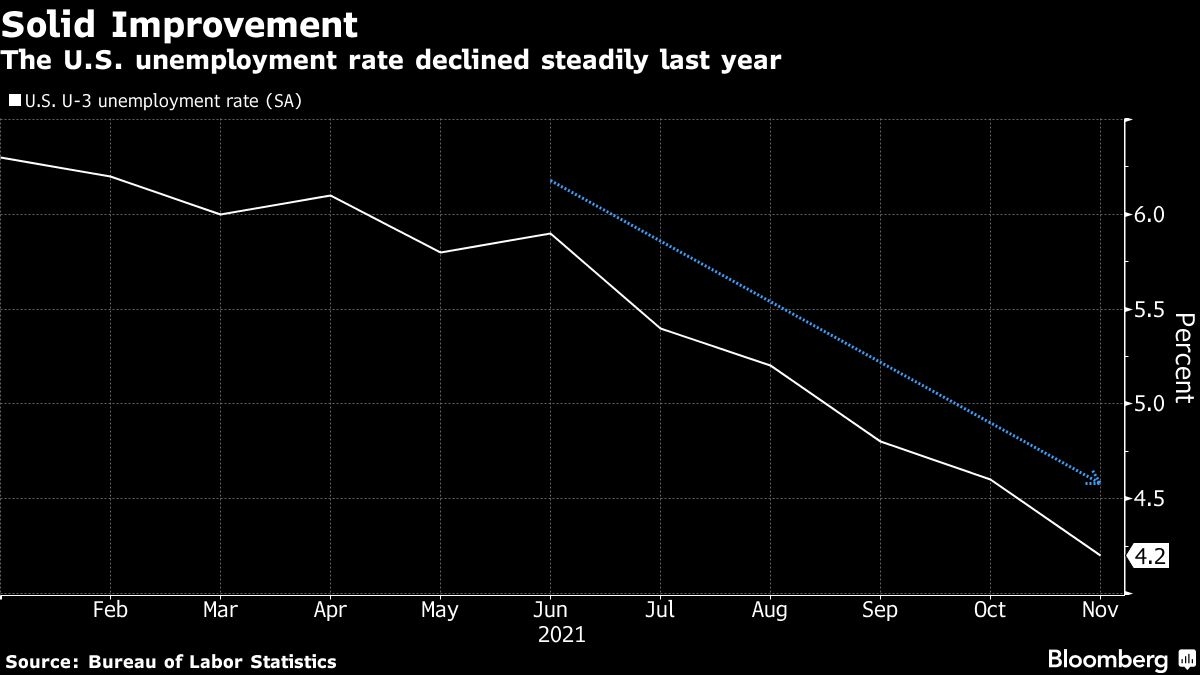 But differences between demographic groups remain. The unemployment rate for Black Americans is nearly double that for White Americans. Economists and policy makers, including those at the Fed, will be watching to see whether the gap narrows throughout this year.

Strong demand for workers, coupled with very low supply, fueled solid wage increases in 2021. While the pace of wage growth may slow if more Americans enter the labor force this year, workers are expected to maintain much of the bargaining power they had over the last 12 months, especially with inflation growing by the most since the 1980s.

“As more supply comes back into the market, that might take some fervor out of the recent pace,” House said. “But it’s still very tight” which will encourage “another year of labor income growth, especially coupled with strong pace of overall hiring.”