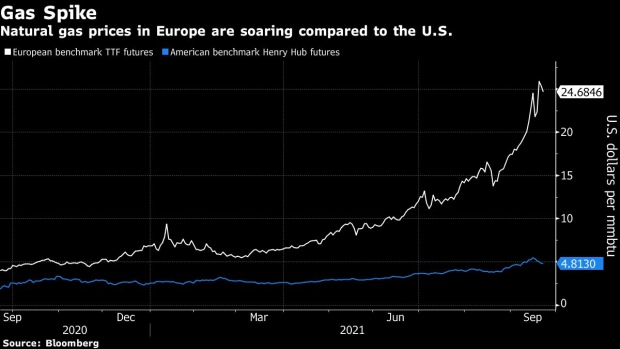 Prices of natural gas, the main feedstock for most nitrogen producers, are skyrocketing in Europe, and companies like Oslo, Norway-based Yara International ASA will have to contend with dramatically higher costs of production. This will drive up prices for products like nitrogen fertilizer globally, Scotiabank analyst Ben Isaacson said in a note.

Meanwhile, North American producers like CF and Nutrien Ltd. will get to take advantage of those premium prices while enjoying lower energy costs. CF operates the biggest nitrogen complex in the world in Louisiana.

The high fertilizer prices are raising the cost to produce agriculture commodities, adding to concerns about global food inflation. Prices could continue to soar through the spring, Isaacson said.

“Much of domestic production has already been contracted to U.S. buyers,” she said.

Corn farmers have to put nitrogen on their fields every year, so they’ll still be buying despite rising costs. Because the U.S. is a net importer of nitrogen, farmers will also have to bid on pricey European product.

While CF’s U.S. business is set to benefit from the energy cost differentials, the U.K. nonetheless decided Tuesday to give financial support to the company so it can restart its fertilizer plant there, which was halted by the high gas prices. The government wants to ensure supplies of carbon dioxide, which is a byproduct of fertilizer production.

Read: Food Prices Poised to Surge With Fertilizer at Highest in Years