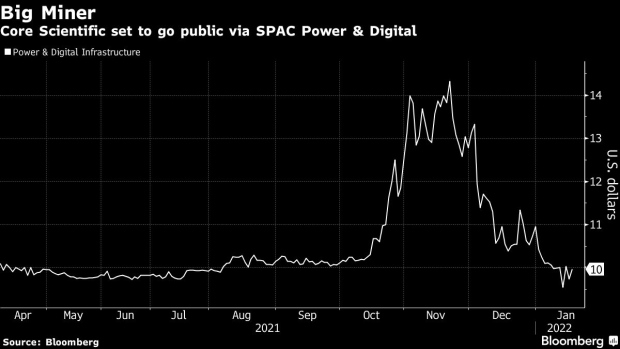 Signage for Bitcoin at a booth at the Hong Kong Fintech Week in Hong Kong, China Photographer: Paul Yeung/Bloomberg , Bloomberg

Investors in one of North America’s largest Bitcoin miners have approved a plan to go public through an estimated $4.3 billion merger with the special purpose acquisition company Power & Digital Infrastructure Acquisition Corp.

Rechristened Core Scientific Inc., the Austin, Texas-based firm said it would be the biggest based on processing power, with combined mining capacity on the Bitcoin network that exceeds that of competitors. The company mines for itself and provides internet hosting services for other large-scale miners across the data centers it owns and operates. Core Scientific will begin trading on the Nasdaq on Thursday under its own symbol, CORZ.

Power & Digital shares haven’t seen much life since late November when the blank-check company hit a peak of almost $15 as a rout in that corner of equity capital markets took hold. The IPOX SPAC Index is off almost 40% since its February 2020 peak, according to data compiled by Bloomberg.

Core is often referred to as an “institutional-grade” miner, in part, because it derives about half its revenue by helping big customers mine, but also, because the world’s largest asset manager, BlackRock Inc., is involved in the deal as the anchor investor in the SPAC.

Greater scale and access to public capital will help amid heightened competition in the Bitcoin mining industry, with profitability concerns at the fore in the wake of Bitcoin’s slide from all-time highs in November. Core Scientific CEO Mike Levitt, who co-founded the company in 2017, is more concerned about quality.

“We’ve worked hard to lay the groundwork that will enable us to achieve our 2022 projections,” he said in a telephone interview. “Our objective is to be the best. Being the best means doing all that we can for our business, the industry in which we participate and for the Bitcoin network.”

Core Scientific had mining capacity of 6.6 exahash, or a measure of computational power, for its own account and 6.9 for hosted customers, for a combined 13.5 exahash of processing power at the end of last year. That exceeded the company’s previously issued outlook for 11 by the end of 2021. They also had a stockpile of 5,296 Bitcoin.

Marathon Digital Holdings Inc. had a 3.5 exahash rate at the end of December, and Riot Blockchain Inc., 3.1 exahash, respectively, though both companies have projected sharp gains in processing power for the coming year.