U.S. stocks plunged, with the Dow Jones Industrial Average tumbling almost 800 points, as a litany of concerns wiped out the rally in risk assets.

Trade-sensitive shares sank as angst mounted that the U.S. and China made no meaningful progress on the trade front this weekend. Financial shares got hammered as the yield curve continued to flatten, with the latest nudge from a hawkish comment by a Federal Reserve official.

Losses accelerated and trading volumes in S&P 500 futures spiked after contracts for broke below their 200-day moving average. Adding to the risk aversion was news that U.K. Prime Minister Theresa May’s push to avoid a so-called "hard Brexit" may be at risk.

“Today’s move feels like the market is a scorned lover. It had believed, for whatever reason, that progress was being made at the G-20 and that turns out to be murky -- it feels lied to,” said Michael Antonelli, a managing director at Robert W Baird & Co. “Then a pile of negative Brexit news, Williams starts to ramp up hawkish talk, then we have our yield curve acting like it got run over and boom, we puke.”

Square plunged 12 per cent as investors ditched stocks that had led the latest rally to all-time highs Banks were the worst performing sector in the S&P 500, led by declines in Bank of America, JPMorgan and Wells Fargo       UPS and FedEX tumbled, making the Dow Jones Transportation Average Index one of the worst performing major U.S. indexes, amid concern about increasing competition from Amazon Air

President Donald Trump suggested Tuesday that he could extend a 90-day truce in his trade war with China, while his top White House economic adviser backtracked from the president’s announcement that Beijing had agreed to reduce tariffs on U.S.-made cars. The developments again called into question the extent of a trade agreement the White House said Trump had struck with Chinese President Xi Jinping over dinner at the Group of 20 summit on Saturday.

“Yes, there is a halt in tariffs,” said Delores Rubin, senior equities trader at Deutsche Bank Wealth Management. But “we haven’t resolved anything yet.”

In the Treasury market, all eyes remain on the yield curve after three-year yields climbed above those of their five-year peers on Monday, potentially foreshadowing the end of the Fed’s tightening campaign. The more closely watched part of the curve -- the gap between two-year and 10-year yields -- remains upwardly sloped.

Traders are even starting to bet that the Fed will cut interest rates as soon as 2020. The swaps market has moved up the timing for when it sees the hiking cycle peaking, toward the end of 2019 or early 2020, a period when the Fed’s own projections indicate tightening will still be under way. Swaps indicate about 5 basis points of a cut priced in by mid-2020.

“Any breakthroughs on trade also brings the Fed back into the picture,” Dan Skelly, Morgan Stanley equity model portfolio solutions head, said on Bloomberg TV. “If you look at the market the last week or so you saw the market pop on both the dovish Fed -- or a perceived dovish Fed, if you will -- as well as the trade headlines. And it’s hard to have both, in our opinion. And so these positive updates potentially on trade just bring the Fed back even faster." 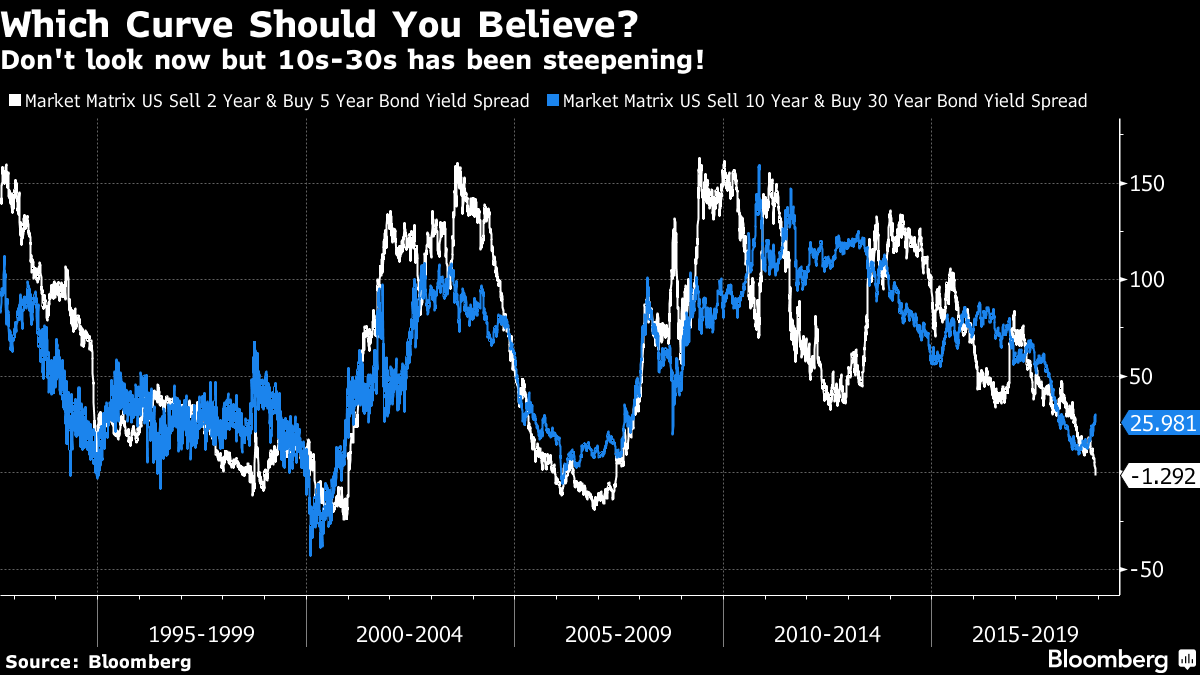