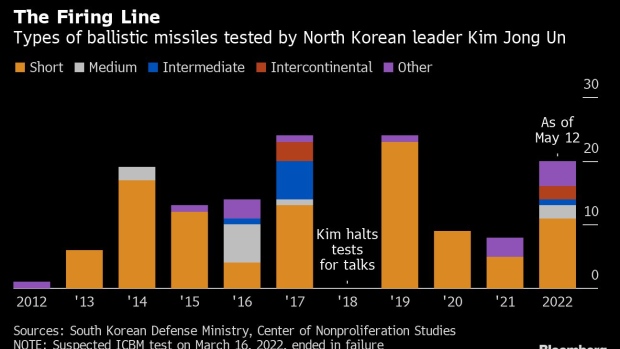 The projectiles were fired at around 6 a.m., 6:37 a.m. and 6:42 a.m. from an area near Pyongyang’s airport and flew toward waters off North Korea’s east coast, the South’s Joint Chief of Staff said. Japan’s Coast Guard said that North Korea fired two suspected ballistic missiles and they appear to have already landed.

Further details of the launch were not immediately available. North Korea usually doesn’t comment on its launches until the next day.

North Korea last fired three, short-range ballistic missiles on May 12, just hours after saying it had its first confirmed Covid-19 case within its borders.

North Korea has been firing missiles at a record pace this year. Over the past several months, it has tested a variety of missiles designed to evade U.S.-operated interceptors and increase the threat of a credible nuclear strike against the U.S. and its allies in Asia.

Biden on Tuesday wrapped up his first trip as president to South Korea and Japan for discussions with the two US allies that host the bulk of American troops in the region. Biden agreed with his South Korean counterpart Yoon Suk Yeol Saturday to start talks on expanding joint military exercises aimed at countering the threat posed by North Korea.

North Korea has a habit of timing its provocations to political events. Security officials in the US and South Korea said this week that Pyongyang may also be preparing for to soon conduct it first test of a nuclear bomb since 2017.

Satellite imagery indicated workers have been digging a new passageway at the Punggye-ri site where North Korea conducted all six of its previous nuclear tests, specialist service NK News and others reported.

In March, North Korea fired an intercontinental ballistic missile that reached an altitude of 6,200 kilometers (3,900 miles) and traveled 1,080 kilometers to splash down in the sea to the west of Japan, which was higher and farther than North Korea’s last successful ICBM test in November 2017.

North Korea tried to deceive the world about the type of missile it fired, claiming that it successfully tested a “huge,” new ICBM while actually firing off a Hwasong-15, the same rocket launched in 2017, South Korean defense officials said.

North Korea claimed it fired a Hwasong-17, which is first unveiled in an October 2020 military parade. Weapons experts described it as the world’s largest road-worthy ICBM and it appeared designed to carry a multiple nuclear warhead payload to the U.S. mainland.

South Korea said its neighbor likely fired off a Hwasong-15 on March 24, which is thought to be able to deliver a single warhead to all of the U.S. mainland, after a failed launch on March 16 of a Hwasong-17.

Kim enacted a self-imposed moratorium on tests of nuclear devices and intercontinental ballistic missiles that could deliver a warhead to the U.S. mainland to facilitate talks with then President Donald Trump in 2018. The two met three times and their discussions resulted in no tangible steps to wind down Pyongyang’s atomic arsenal -- which only grew larger as their talks sputtered.