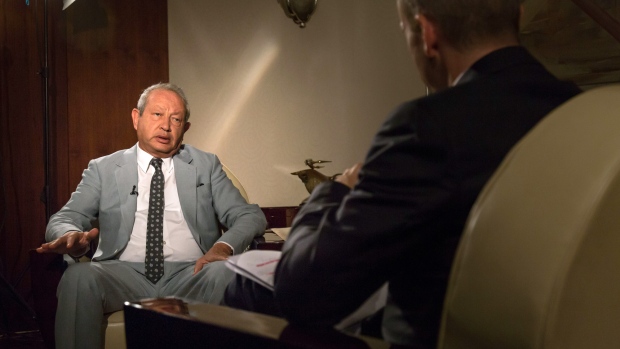 (Bloomberg) -- Some big investors see warning signs ahead for markets but are holding their positions. Egyptian billionaire Naguib Sawiris is taking action: He’s put half of his $5.7 billion net worth into gold.

He said in an interview Monday that he believes gold prices will rally further, reaching $1,800 per ounce from just above $1,300 now, while “overvalued” stock markets crash.

“In the end you have China and they will not stop consuming. And people also tend to go to gold during crises and we are full of crises right now,” Sawiris said at his office in Cairo overlooking the Nile. “Look at the Middle East and the rest of the world and Mr. Trump doesn’t help.”

President Donald Trump is aiding Sawiris in one way, though: If a North Korean peace deal can be reached, the Egyptian’s investments there may finally pay off. After 10 years of waiting to repatriate all his profits easily and control his mobile-phone company, Egypt’s second-richest man says an accord would let him reap some of his returns.

“I am taking all the hits, I am being paid in a currency that doesn’t get exchanged very easily, I have put a lot of money and built a hotel and did a lot of good stuff there,” said Sawiris, who founded North Korea’s first telecom operator, Koryolink. The North Korean unit’s costs and revenues aren’t currently recognized on the financial statements of Sawiris’ Orascom Telecom Media & Technology Holding SAE.

Sawiris over the years has been pressured by “every single Western government in the world” for his presence in the country hit by international sanctions for its nuclear threats, he said, but he considered himself a “goodwill investor.” His advice for governments and to Trump ahead of his expected meeting with North Korean Leader Kim Jong Un: Don’t bully him, and promise prosperity in exchange for concessions on nuclear.

A successful meeting between Kim and South Korean President Moon Jae-In last week cleared the way for Trump to meet with the North Korean leader to discuss his nuclear-weapons and ballistic-missile programs. The date and the place haven’t been set. An agreement -- elusive for almost seven decades -- would open the door for Sawiris to restore his investments there and possibly make new ones.

“I know these North Korean people. They are very proud, they will not yield under threat and bullying. You just smile and talk and sit down and they will come through,” he said.

Sawiris, the son of Onsi Sawiris, who founded Orascom Construction, has built a name by investing in the telecom sector in Egypt and in less popular markets including Iraq, Pakistan, North Korea and Bangladesh. He also bought Italy’s Wind Telecomunicazioni before merging it, along with a number of his telecom assets, with Veon Ltd. in 2011.

Since then Sawiris has diversified into the financial sector by buying out Egyptian investment bank Beltone Financial Holding and attempting to buy CI Capital Holding to create Egypt’s biggest investment bank. His offer was blocked. He also expanded in mining, becoming, with his family, the largest investor in the sector through shareholdings in Evolution Mining, Endeavour Mining Corporation and La Mancha Resources Inc.

“I had to convince my mom in the beginning,” Sawiris said in the interview with Bloomberg Television. “It has been a very good investment for me. I recently sold a portion of my Evolution shares because I want to invest now in Latin America and Eastern Europe.”

He’s from a family of investors. Nassef Sawiris, Naguib’s youngest brother and the richest man in Egypt, is the biggest shareholder and chief executive officer of fertilizer producer OCI NV. He’s also the biggest shareholder in contracting and engineering company Orascom Construction Ltd. He re-based his companies outside Egypt after a tax dispute with the Muslim Brotherhood government in 2013.

Sawiris said his view of Saudi Arabia was negatively impacted by a corruption crackdown that led to the arrest of high-profile princes and billionaires in November. Authorities need to ensure there is rule of law and order and transparency, he said.

Rather, Sawiris is giving investment priority to his homeland after an International Monetary Fund-backed reform program that began in 2016. By lifting all restrictions on the currency and cutting subsidies, it boosted investors’ confidence in the economy of the Arab world’s most populous nation.

And he’s planning an investment debut in Egypt’s “booming” real estate market this year after hiring a consultant who said demand was strong, shrugging off concerns of a bubble in the market.

“In my family we are investing a lot right now because we see the opportunities,” he said. “It isn’t patriotism or advertising or anything like that.”

--With assistance from Devon Pendleton and Hussein Slim .

To contact the reporters on this story: Tamim Elyan in Cairo at telyan@bloomberg.net, Manus Cranny in London at mcranny@bloomberg.net.

To contact the editors responsible for this story: Lin Noueihed at lnoueihed@bloomberg.net, Anne Swardson, Stuart Biggs