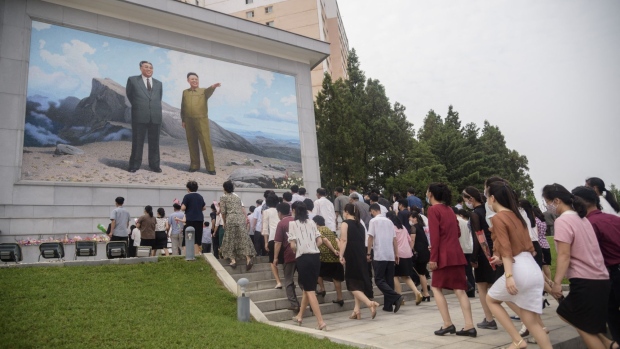 (Bloomberg) -- North Korea’s economy in 2020 posted its sharpest drop since a deadly famine in the 1990s due to the coronavirus, natural disasters and international sanctions that have walloped Kim Jong Un’s already struggling state.

Gross domestic product contracted 4.5% in 2020 in the sharpest fall since 1997, according to estimates from South Korea’s central bank, which for years has provided the best available accounting of the economic activity of the secretive state.

The report shows that North Korea’s economy shrank last year to its smallest size Kim took over in late 2011. Gross domestic product fell to 31.4 trillion won ($27.4 billion), down from 33.8 trillion won in Kim’s first year at the helm, according to the South Korean central bank data released Friday.

Kim’s decision to shut borders more than a year ago due to the pandemic has caused trade to plunge, slowing to a trickle the flow with its main benefactor, China. North Korea’s exports last year dropped 67.9% to just $90 million, while imports fell 73.9%, according to the Bank of Korea report.

Kim, who pledged to improve living conditions in the country with one of the world’s lowest levels of per capita GDP, has let his people and ruling party know his state is feeling the pinch. He has issued rare warnings of economic struggles and food shortages but so far has shown no indication he’s willing to return to discussions on reducing his nuclear arsenal in return for economic incentives from other countries including the United States.

But Kim and South Korean President Moon Jae-in this week agreed to a thaw in their chilly relations and to restore hotlines cut for more than a year due to political rancor, improving the dim prospects for a breakthrough in an extended stalemate in nuclear talks.

By making its problems public, Kim may be sending a signal to the Biden administration to allow more assistance through international organizations like the United Nations World Food Program. But foreign aid organizations have had trouble getting into North Korea to deliver humanitarian assistance, with the World Food Program saying in late 2020 it was critical for the country to ease restrictions on the entry of international personnel.

In the face of global sanctions to punish it for its nuclear weapons program, North Korea has relied heavily on cybercrime to fill its depleted coffers. It had taken in about $2 billion in 2019 through the worldwide theft of resources from the financial sector, according to testimony to a U.S. House committee last June.

The contraction in the economy in 2020 is North Korea’s sharpest since 1997, when a series of droughts, floods and botched economic policies caused a famine that killed an estimated 240,000 to 3.5 million people. While the chance of a similar event playing out again are far smaller due to unofficial markets mushrooming across the country under the tacit consent of the government, Kim warned last month that the “food situation is now getting tense.”

The economy isn’t likely to rebound this year either. Fitch Solutions said in April that North Korea’s economy would barely grow in 2021 as borders stayed shut.

North Korea for years has blamed the U.S. for its economic woes and justified the huge chunk of state spending that goes to its military as necessary to prevent an American invasion. The economic hardships have not stopped Kim’s nuclear arsenal from growing, with Pyongyang producing enough fissile material annually for about six nuclear bombs.