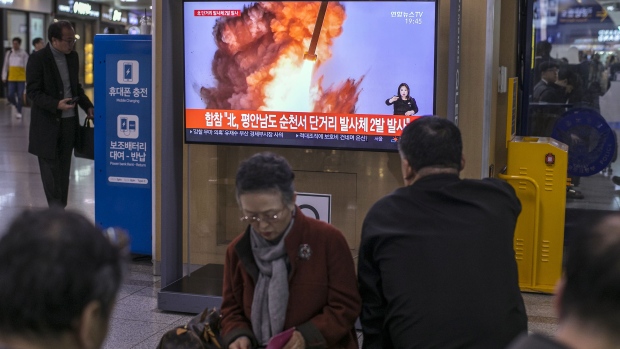 (Bloomberg) -- All year, President Donald Trump refused to respond as North Korea carried out short-range missile tests and chipped away at crippling international sanctions. He even ignored a new volley of insults branding him a “heedless and erratic old man.”

That restraint may not last much longer as North Korea hints darkly that it will make a major move by the end of this month, possibly including a long-range missile launch or a nuclear bomb test as a “Christmas gift” to the U.S.

“It’s hard to get a rise out of someone if they keep turning the other cheek,” Bruce Klingner, a senior research fellow for Northeast Asia at the Heritage Foundation in Washington, said of Trump’s responses so far. “I think he’d be willing to downplay even bigger provocations until they cross the line, and then after that really we don’t know.”

A return to intercontinental ballistic missile launches or nuclear tests could send U.S.-North Korea ties back to where they were in 2017, when tensions between the historic enemies surged and analysts worried about a military conflict. It would also undermine what Trump considers one of his key foreign policy achievements as he faces impeachment proceedings and heads into an election year.

At the crux of the president’s calculations is whether it’s worthwhile to keep pressing North Korea’s Kim Jong Un to negotiate even though he’s no closer to giving up his nuclear weapons 18 months after the U.S. hailed a summit between Trump and Kim in Singapore as a major breakthrough. Analysts argue that the potential threat posed by North Korea is so grave that Trump has no choice but to keep trying.

“It’s been said, ‘Don’t be afraid to go on a wild goose chase, because that’s what they made wild geese for,’” Klingner said. “You can’t just throw up your hands and surrender.”

So far Trump has refused to be drawn into action by repeated North Korean missile and engine tests -- even when they violate United Nations resolutions -- so long as Kim keeps honoring a self-imposed moratorium on testing a nuclear device or launching a long-range missile that could reach the U.S. At most, Trump has revived his “Rocket Man” nickname for Kim and boasted that “we have the most powerful military we’ve ever had” and if necessary “we’ll use it.”

The president’s objective, according to numerous people familiar with the U.S. strategy, is to deny North Korea an excuse to take more consequential action while sticking to his refusal to ease U.S. sanctions without a firm commitment from Pyongyang to give up its nuclear arsenal.

Among the options to respond to a North Korean provocation: The Defense Department could revive joint military drills with South Korea that it pulled back on Trump’s orders. New sanctions could be imposed on foreign banks and other businesses -- mostly in China -- that still do business with North Korea.

For now, Trump continues to flatter Kim and highlight their supposed personal relationship, as he has done for many months.

“Kim Jong Un is too smart and has far too much to lose, everything actually, if he acts in a hostile way,” Trump tweeted on Dec. 8. “North Korea, under the leadership of Kim Jong Un, has tremendous economic potential, but it must denuclearize as promised.”

That leaves unanswered, though, what North Korea will do if Trump holds firm to the U.S. refusal to relax its “maximum pressure” sanctions regime this month -- and what Trump would do in response if it defies U.S. warnings against testing long-range missiles or a nuclear bomb.

“Drawing nearer is the year-end time limit the DPRK set for the U.S.,” North Korean diplomat Ri Thae Song said in a statement on Dec. 3, invoking North Korea’s formal name. “It is entirely up to the U.S. what Christmas gift it will select to get.”

Yet Kim will have to weigh any escalation against the possibility he’d be putting ties with China at risk, or inviting tougher sanctions.

A Dec. 22 deadline also is looming under a 2017 UN Security Council resolution demanding that all North Koreans working overseas return home within two years. South Korea estimates there are about 50,000 such laborers, who are a key source of income for the government.

“We’re hopeful that they will be able to complete that and come into full compliance with that,” Secretary Michael Pompeo said Tuesday at a news conference with visiting Russian Foreign Minister Sergei Lavrov. “President Trump’s been unambiguous about our expectation.”

On Wednesday, the UN Security Council will meet at the request of the U.S. to discuss the recent missile launches by North Korea, and what the council’s response might be if North Korea does something truly provocative by the end of the year.

“We’re all waiting with bated breath to see what the North Koreans are going to do,” said Evans Revere, a senior director with the Albright Stonebridge Group.

In the meantime, negotiations between the U.S. and North Korea have stalled out completely. There’s been no high-level contact between the two sides since talks ended in failure in October.

The intractability of the problem -- and the lack of progress -- was only underscored last weekend when North Korea’s ambassador to the UN said his country doesn’t need to have “lengthy” talks with the U.S., adding that “denuclearization is already gone out of the negotiating table.”

The diplomat’s comments came just before North Korea tested a rocket engine at a launch site that it had started to dismantle as part of denuclearization talks with the U.S. last year. Stephen Biegun, the U.S. envoy for North Korea talks, had once touted the closing of that site as a “step in the right direction.”

Whatever comes next, Trump may have lost the leverage he once gained from talking tough. In 2017, he threatened “fire and fury” and officials talked of a “bloody nose” strike against North Korea. Washington and Seoul were gripped with anxiety that Trump might order such an attack, even if it meant North Korea turning its artillery guns on the South Korean capital.

But in the more than two years since, Trump has shown his distaste for conflict, pulling troops from northeast Syria and calling off a strike against Iran after it shot down a U.S. drone.

“In 2017, nobody knew Trump, so we thought maybe there’s something to the bloody nose rhetoric but now we know Trump doesn’t like war,” said Sue Mi Terry, a former CIA analyst who’s now at the Center for Strategic and International Studies in Washington. “Fire and fury will be less credible the second time around.”

--With assistance from David Wainer.

To contact the reporter on this story: Nick Wadhams in Washington at nwadhams@bloomberg.net