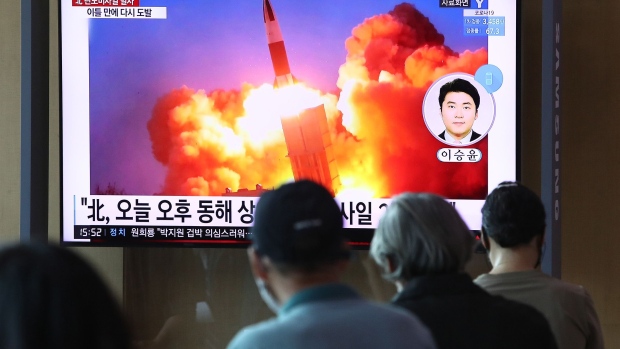 SEOUL, SOUTH KOREA - SEPTEMBER 15: People watch a TV at the Seoul Railway Station showing a file image of a North Korean missile launch, on September 15, 2021 in Seoul, South Korea. The unidentified type of missiles were fired from central inland areas of the North on Wednesday afternoon, and the South Korean and the U.S. intelligence authorities are analyzing details for additional information, the JCS said in a release. (Photo by Chung Sung-Jun/Getty Images) , Photographer: Chung Sung-Jun/Getty Images AsiaPac

(Bloomberg) -- North Korea is expanding a plant used to enrich uranium for nuclear bombs, two reports based on satellite imagery show, in another sign that Kim Jong Un is removing self-imposed constraints on his atomic weapons program put in place during talks with the U.S.

The enrichment plant at the Yongbyon nuclear complex has been expanded and units that control its internal temperature have been removed in recent weeks, according to reports posted Thursday on the Arms Control Wonk and 38 North websites. Still, analysts differed on what the cooling units’ removal indicated about production at the facility, which is being watched for clues whether Kim has shifted away from negotiating and toward arms buildup.

The renovations indicate that North Korea plans to increase production by as much as 25%, Jeffrey Lewis wrote on his Arms Control Wonk website. “An overhaul of the cooling system would be consistent with an increase in the floorspace and number of centrifuges, which would require additional cooling,” said Lewis, director of the East Asia nonproliferation program at the Middlebury Institute of International Studies at Monterey.

The 38 North website said separately that satellite imagery indicated the cooling units were removed between Aug. 25 and Sept. 1. “The purpose of the units’ removal is unclear,” four authors including Frank Pabian said in a post, adding the that facility may currently be idle.

“If North Korea is indeed in the process of replacing the cooling units for a system better-suited for the plant’s operational functionality (assuming an alternative means of cooling is not already in place), it has likely paused uranium-enrichment activities until that system upgrade is complete,” the post said.

The upgrade at the uranium-enrichment facility at Yongbyon comes after the International Atomic Energy Agency said North Korea had also resumed plutonium-production operations there for the first time in about three years. Those efforts suggest Kim isn’t planning to come to the negotiating table with U.S. President Joe Biden any time soon, since it takes several months of firing in the reactor before another lengthy operation can be started to process the fuel rods and extract plutonium.

Ratcheting down operations at the closely watched Yongbyon plant was one of the self-imposed steps Kim took to improve the political climate for his landmark summits with former U.S. President Donald Trump in June 2018 and February 2019. Talks broke down after Trump rejected Kim’s offer to dismantle Yongbyon, and the North Korean leader soon resumed weapons tests.

His more recent tests have been dominated by smaller, “tactical” weapons intended to deter an invasion by allied forces in Japan and South Korea, rather than intercontinental ballistic missiles capable of striking the entire U.S. A wider array of missiles with a variety of purposes requires more warheads, and thereby more fissile material.

The Yongbyon nuclear complex, which has served as the crown jewel of North Korea’s atomic program, is an aging facility about 100 kilometers (60 miles) north of Pyongyang that once was the only source of its fissile material. It churned out roughly enough plutonium each year for one atomic bomb.

Since then, North Korea has used uranium enrichment as the main source of fissile material for weapons, with nuclear experts saying the state can produce enough weapons-grade material for at least six nuclear bombs a year and has at least more than one enrichment plant outside of Yongbyon.