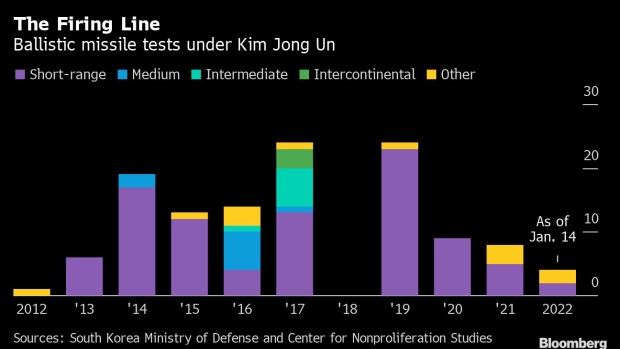 In a video of a previous rail-based test launch, a state TV announcer boasted that North Korea now has “a railway mobile missile regiment that enhances our ability for simultaneous and concentrated strike on our threats, and better respond to various threats.”

North Korea warned Friday it would take a “stronger and certain reaction” after the U.S. sanctioned individuals associated with Pyongyang’s weapons program, saying tests this month of its hypersonic missile system were part of its “legitimate right” to enhance its self-defense. A few hours after the statement appeared on official media, North Korea fired off the two suspected ballistic missiles in what may have been an effort to show it could back its words with a quick response.

The tests in January come after leader Kim Jong Un told a year-end meeting of top ruling party officials he was more interested in bolstering his arsenal than returning to nuclear talks with the U.S. that were stalled for nearly three years. In his remarks, Kim urged North Korea to focus on easing food shortages and containing Covid, while suggesting disarmament talks were a low priority in the coming months.

The Biden administration has indicated it could offer financial rewards, such as easing global sanctions, that have squeezed North Korea in return for verifiable disarmament steps.