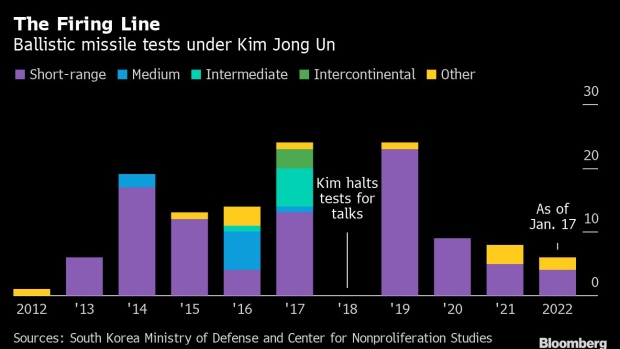 (Bloomberg) -- North Korea said it tested two tactical guided missiles on Monday, as it ratchets up pressure on the Biden administration with its biggest string of missile launches since August 2019.

“The test-fire was aimed to selectively evaluate tactical guided missiles being produced and deployed and to verify the accuracy of the weapon system,” the state’s official Korean Central News Agency said Tuesday of the launch that took place about a day earlier.

North Korea fired the missiles four minutes apart Monday from an airfield in Pyongyang that flew for about 380 kilometers (236 miles) and reached an altitude of 42 km, South Korea’s military said. The missiles “precisely hit an island target in the East Sea of Korea,” according to KCNA, while South Korea said the projectiles splashed down in waters off North Korea’s east coast.

The tests marked North Korea’s fourth volley since Jan. 5. It has previously fired on two separate days a new hypersonic missile system designed to use high speeds and maneuverability to evade U.S-operated interceptors. North Korea also launched a pair of short-range ballistic missiles on Friday from a train carriage.

Hours before the Friday launch, North Korea warned it would take a “stronger and certain reaction” after the U.S. sanctioned individuals associated with Pyongyang’s weapons program, saying tests this month of its hypersonic missile system were part of its “legitimate right” to enhance its self-defense.

North Korea last conducted a large series of tests in mid 2019 when it was rolling out new solid-fuel, short-range ballistic missiles designed to modernize its arsenal and deliver nuclear warheads to U.S. military bases in all of South Korea.

The tests in January come after leader Kim Jong Un told a year-end meeting of top ruling party officials he was more interested in bolstering his arsenal than returning to nuclear talks with the U.S. that were stalled for almost three years. In his remarks, Kim urged North Korea to focus on easing food shortages and containing Covid, while suggesting disarmament talks were a low priority in the coming months.