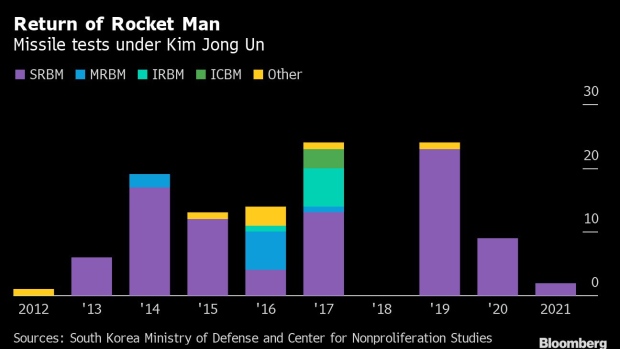 (Bloomberg) -- North Korea warned the U.S. and South Korea of a possible security crisis over joint military drills, saying the exercises threatened a late July deal for reconciliation on the heavily armed peninsula.

“We will make them feel every moment how close they are to a huge security crisis,” Kim Yong Chol said, according to the official Korean Central News Agency. “We must let them know the cost of blowing up the opportunity to improve the inter-Korean relations and responding to our goodwill gesture with hostile actions.”

Kim Jong Un’s regime may be looking to drive a wedge between allies with its high-level criticism. The effort appears designed to leverage South Korean President Moon Jae-in’s goal for improving ties before he leaves office next year to Pyongyang’s advantage.

South Korean media including Yonhap News Agency said Moon’s government was looking to downsize the drills. More than 70 lawmakers from Moon’s progressive camp issued a joint statement last week calling for the exercises to be postponed.

Moon’s government heralded a deal with North Korea in late July to restore communications links that had been silent for more than a year as a turning point. But North Korea didn’t answer a hotline call Tuesday and ignored regularly scheduled calls via a military communication line, signaling the detente may be short-lived.

U.S. State Department spokesman Ned Price tried to reassure North Korea on Tuesday that the drills were “defensive in nature” and not a threat to Pyongyang’s leaders. “The United States harbors no hostile intent towards the DPRK,” he told a news briefing, referring to North Korea by its formal name and reiterating the longstanding American position.

The U.S. and South Korea have been holding joint exercises for decades without any major incidents, but that has not stopped North Korea from complaining the drills are a prelude to an invasion and nuclear war.

North Korea tested two short-range ballistic missiles in March, the first since Biden took office. But it has so far refrained from the type of provocations it used when Barack Obama and Donald Trump began their presidencies, which included nuclear tests and long-range missile launches.