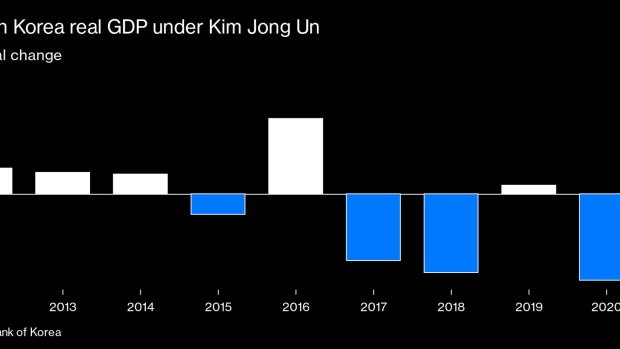 The pursuit of the advanced hypersonic missiles system, which are designed to evade existing defenses, is North Korea’s “legitimate right,” the country’s Foreign Ministry said in a statement. Washington’s move to slap sanctions on North Koreans who advanced its nuclear and ballistic weapons programs was a dangerous escalation, the ministry added in a statement released Friday through the state’s official Korean Central News Agency.

A dispatch from the Foreign Ministry is usually reserved for North Korea’s most important messages to the outside world. The statement ratchets up tensions as the Biden administration is pushing Kim Jong Un to return to nuclear disarmament talks stalled for nearly three years. Kim’s regime has shunned overtures for talks, stepped up its production of fissile material for nuclear bombs and tested new systems to deliver atomic warheads.

“The U.S. is intentionally escalating the situation even with the activation of independent sanctions, not content with referring the DPRK’s just activity to the UN Security Council,” the ministry said, referring to the country’s official name, the Democratic People’s Republic of Korea.

“If the U.S. adopts such a confrontational stance, the DPRK will be forced to take stronger and certain reaction to it,” it added.

The heightened tensions between the U.S. and North Korea come after Pyongyang tested two missiles in less than a week designed to deploy a hypersonic glide vehicle that can maneuver at high speeds during an unpowered flight to strike a target. For the first time in nearly two years, Kim oversaw a weapons test when he watched the Tuesday launch of a hypersonic system that North Korea claimed performed “corkscrew” maneuvers and hit a target 1,000 kilometers (620 miles) away.

On Wednesday, the U.S. Treasury Department designated five North Koreans living overseas -- one in Russia, and four in China -- for aiding the country’s weapons programs.

The U.S. point man for North Korea, Sung Kim, held separate talks with his counterparts from Japan and South Korea after the latest tests, emphasizing that Washington condemned the moves for violating United Nations Security Council resolutions banning Pyongyang from ballistic missile testing. He also called on North Korea to halt “destabilizing activities” and get back to the bargaining table, the State Department said Thursday.

Kim’s regime was hit with tightened UN sanctions to punish it for nuclear and missiles tests in 2017 that have been a major factor in making North Korea’s economy even smaller now than when Kim took power a decade ago. The Biden administration has indicated it could provide economic rewards for steps to wind down the nuclear arms program.

“These designations convey our serious and ongoing concern about the DPRK’s continued proliferation activities and those who support it,” Secretary of State Antony Blinken said in a statement this week. “We remain committed to seeking dialogue and diplomacy with the DPRK and call on the DPRK to engage in negotiations.”

The North Korean Foreign Ministry statement accused the U.S. of using “gangster-like” logic with sanctions, which it said demonstrated that Washington wasn’t interested in talks.

“This shows that though the present U.S. administration is trumpeting about diplomacy and dialogue, it is still engrossed in its policy for isolating and stifling the DPRK,” the foreign ministry said. “The DPRK will not abandon its just right.”