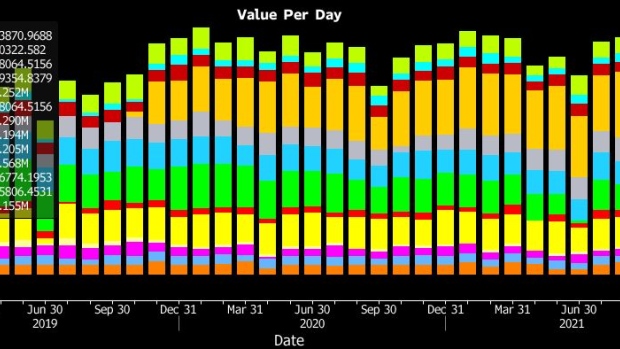 The processing, drilling and production platforms stand on the Johan Sverdup oil field off the coast of Norway in the North Sea, on Tuesday, Dec. 3, 2019. Sverdrup's earlier-than-expected start in October broke a long trend of underperformance for Norway's overall oil production. , Bloomberg

The differential for Forties, the grade which is usually used to set the global benchmark Dated Brent, dropped to a discount of six cents a barrel to that marker on Tuesday, according to assessments by S&P Global Platts. That was the first time the grade had flipped to a discount since mid-June. Just a week ago, it was still at a premium of about 80 cents.

The weakness in North Sea grades comes as loadings of the region’s 13 main crudes are set to surge to 2.1 million barrels a day in October, the most in more than four years. Forties will see a jump of about 90,000 barrels a day, the biggest increase of any grade. Norway’s giant Johan Sverdrup field will pump a record 568,000 barrels a day next month.

An increase of flows from the U.S. Gulf and a lack of buying interest from Asia has put additional pressure on prices.

The physical market for North Sea grades is now dominated by sellers, and prices of other major crudes in the area have also seen declines. Trafigura Group Ltd. has sold three cargoes of Oseberg and Ekofisk over the past two days on the pricing window run by S&P Global Platts. It also offered several other grades, including Forties and Brent. But buying interest has been muted, with Vitol Group the only purchaser.