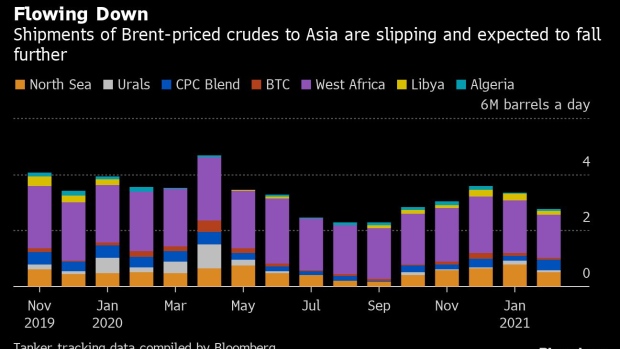 (Bloomberg) -- Heavy maintenance work on North Sea oil fields in the coming months is helping to erode the flow of crude to Asia from some suppliers in the Atlantic basin as a key price spread between the two regions balloons.

The premium for the North Sea’s benchmark Brent crude over Dubai barrels climbed to the highest level since December 2019 on Monday, according to closely watched derivatives called Exchange of Futures for Swaps. The gap rose again on Tuesday, reaching just over $3 a barrel, PVM Oil Associates data show.

North Sea supplies will be significantly constrained throughout the second quarter by routine maintenance programs, chopping millions of barrels of the region’s cargo loadings. Traders say that the heavy round of work is helping to boost the relative price of the North Sea marker Dated Brent.

All the while, U.S. oil production is some 3 million barrels a day lower than it was a year ago, keeping a lid on the supply of light-sweet crudes that compete with Brent.

Because many other Atlantic Basin grades -- including from Russia, West Africa and the Mediterranean -- trade at differentials to Dated Brent, they are having to discount in order to lure Asian buyers.

The Organization of Petroleum Exporting Countries and its allies shocked traders on Thursday by announcing that their production would be kept lower than the market was expecting at least through April. Even so, that appears to have done little to boost the price of Dubai crude relative to Brent.

Traders of Russia’s Urals crude say that sales are currently going slowly with relatively subdued Asian buying interest. Nigerian barrels that would typically flow to Europe are also struggling to find alternative buyers while the continent’s demand remains constrained by Covid-19, according to people in that market.

The lack of buying interest may be temporary. Swaths of the northern hemisphere refining system are about to start ramping up maintenance programs of their own, distorting their crude buying for a few months.

Asia bound shipments of the main Atlantic Basin crudes that price relative to Brent look set to slump to their lowest since September in February, according to tanker tracking data compiled by Bloomberg.