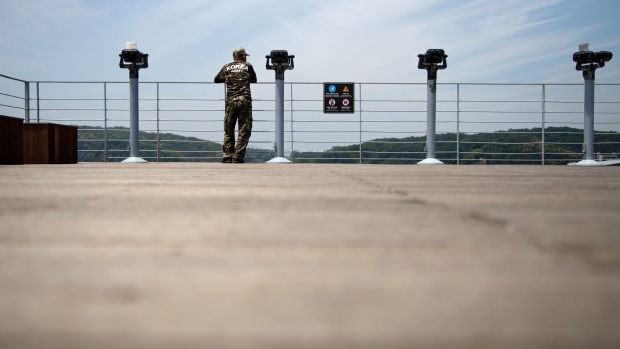 A man wearing a T-shirt with the words "Korea Army" looks across to the North Korean side of the border at the Imjingak pavilion near the Demilitarized Zone (DMZ) in Paju, South Korea, on Wednesday, June 17, 2020. North Korea said it would deploy troops into areas on its side of the border where it had joint projects with South Korea, further escalating tensions with its neighbor a day after destroying a liaison office the two once shared. Photographer: SeongJoon Cho/Bloomberg , Bloomberg

(Bloomberg) -- South Korea reestablished communication hotlines with North Korea, the Hankyoreh newspaper said, restoring a link that had been silent for more than a year and taking a rare step toward easing tension.

The lines were restored as of 10 a.m. Tuesday, the South Korean paper reported, citing people it didn’t identify.

Communications were cut off in June 2020 during one of the worst flareups in years between the Koreas. That dispute culminated later than month in Kim Jong Un’s regime blowing up a liaison office on the northern side of the border.

The office had been opened in the spirit of rapprochement advocated by South Korean President Moon Jae-in.