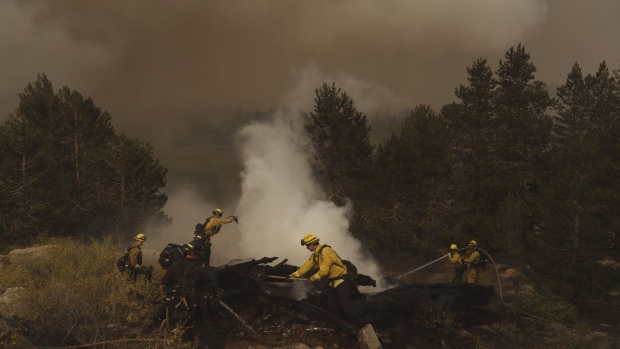 Firefighters work on a spot fire during the Caldor Fire in Kirkwood, California, U.S., on Friday, Sept. 3, 2021. The Caldor Fire, which ignited Aug. 14 has burned at least 212,907 acres, or more than 332 square miles, and containment stood at 29% as of Friday, Cal Fire said in its morning update. Photographer: Eric Thayer/Bloomberg , Bloomberg

(Bloomberg) -- Northern California may get a respite from wildfire season when rain and snow fall on tinder-dry trees and brush in coming days. The initial burst of precipitation will begin Tuesday into Wednesday, with the main event commencing this weekend, said Emily Heller, a National Weather Service meteorologist in Sacramento. “It is definitely going to help things out,” Heller said. “Whether we can say fire season is quote-unquote over, we will have to hear from the i-mets in the field, but it will definitely be helpful.” I-mets are incident meteorologists that accompany firefighting crews into burning forests.Fires in California have killed at least three people and scorched nearly 2.5 million acres (1 million hectares) through Oct. 15 and led to blackouts as utilities shut off electricity to prevent new blazes.

The geographic span of the fires hasn’t yet topped the acreage burned during the same period last year, it’s well above the five-year average, according to the California Department of Forestry and Fire Prevention, also known as Cal Fire.

This year’s blazes also drove thousands from their homes and are thought to have killed hundreds of giant sequoias. Southern California won’t see the sort of relief heading for northern counties, said Brian Hurley, a senior branch forecaster at the U.S. Weather Prediction Center. Most of the rain and snow will fall from San Francisco north. California is still completely covered by drought, according to the U.S. Drought Monitor.

Across Southern California the landscape will remain parched and the region will still have to contend with the Santa Ana winds that blow dry gusts that fan the flames. “It is really tough to say ‘hey that’s it’ in regard to the fire season and the reservoirs there are still well below normal,” Hurley said.