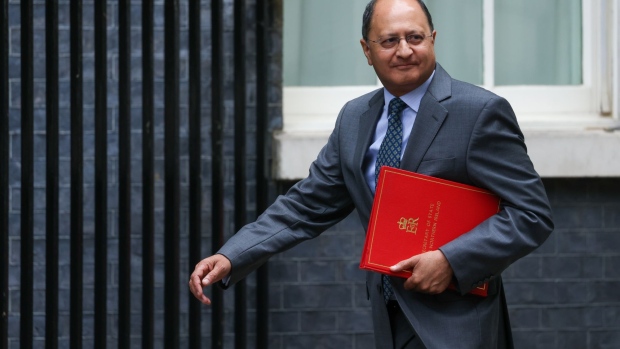 (Bloomberg) -- Northern Ireland’s biggest unionist party blocked the election of a speaker to the regional assembly for a third time, raising the prospects of a further election.

The region has been operating with a limited administration since February with the Democratic Unionist Party refusing to nominate a speaker to the Northern Ireland Assembly or take part in the power-sharing executive in protest over the Brexit deal struck by the UK with the European Union.

If the stalemate continues past the end of October, the UK’s Northern Ireland Secretary, currently Shailesh Vara, may be forced to call another assembly election. That could come sometime between late November and January, according to Queens’ University Belfast Professor Katy Hayward.

The source of the DUP objections is the Northern Ireland Protocol, the part of the Brexit treaty which puts a trade border between the region and the rest of the UK. The party has said it wants to see progress on the UK government’s new Brexit bill -- which would allow ministers to unilaterally override the protocol -- before they will support the formation of a new executive.

After elections to the assembly in May, Sinn Fein, the largest party, is entitled to nominate a first minister, with the second-placed DUP allowed to propose the deputy first minister. But under the terms of the 1998 Good Friday peace agreement, the positions are equal and one cannot be in place without the other, meaning the DUP’s refusal to participate -- or to nominate a speaker -- stymies the formation of an administration.

For now, eyes will be on Westminster where the ruling Conservative Party leadership contest will determine who is the next Prime Minister and the future of the government’s Brexit policy. Foreign Secretary Liz Truss, the front-runner, is the architect of the legislation to overturn the protocol, and her rival, former Chancellor of the Exchequer Rishi Sunak, has indicated support for the bill.

READ: For Boris Johnson’s Successors, Brexit Is Anything But Done