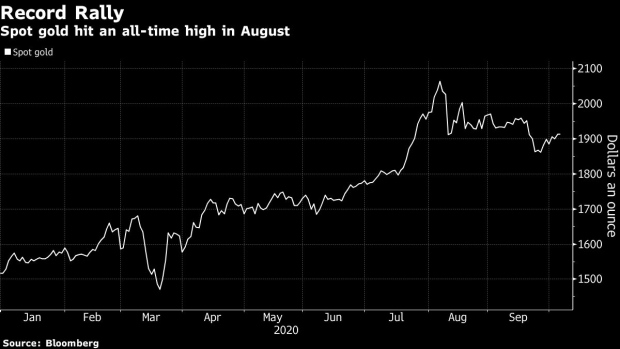 An excavator removes earth to form part of the mine wall at Saracen Mineral Holdings Ltd.'s Thunderbox gold mine south of Leinster, Australia, on Sunday, July 31, 2016. Photographer: Carla Gottgens/Bloomberg , Bloomberg

Adding Saracen’s assets in Australia will put the company on track to produce 2 million ounces a year from fiscal 2027 and deliver as much as A$2 billion in operational savings, Perth-based Northern Star, the country’s second-largest gold miner, said Tuesday in a statement.

The combination of the producers, which already jointly run Australia’s giant KCGM operation -- commonly known as the Super Pit -- may mark a revival of major deal-making in the gold sector, which has ebbed since a two-year long spree through last year that included Newmont Corp.’s mega-merger with Goldcorp Inc.

Deals in the sector worth about $9.8 billion have been completed, or agreed, so far this year, compared to about $26 billion in 2019, according to data compiled by Bloomberg. Northern Star has added more than $1 billion of acquisitions since August 2018, the data show.

“This is significant value-creating M&A,” Northern Star Executive Chairman Bill Beament said in the statement. “Our position as joint venture partners at KCGM, the close proximity of the majority of the combined company’s assets and a host of other synergies makes this a unique opportunity.”

A combined producer will operate three clusters of assets, in the Kalgoorlie and Yandal regions of Western Australia and around the Pogo mine in Alaska, and be in a position to accelerate growth opportunities, according to the statement.

Spot gold prices touched a record in August, surging above $2,000 an ounce on increased geopolitical risks and as sliding U.S. real yields enhanced the metal’s haven status. Bullion was little changed Tuesday, trading at $1,912.76 an ounce as of 10:25 a.m. in Sydney.

The boards of both companies have recommended the transaction, which is expected to be completed in February.

Northern Star’s Chief Executive Officer Stuart Tonkin will remain in his post, with Saracen’s Raleigh Finlayson to act as managing director for 12-to-18 months before taking on a corporate development role. Beament will remain in his position until July, when he’ll become non-executive chairman.