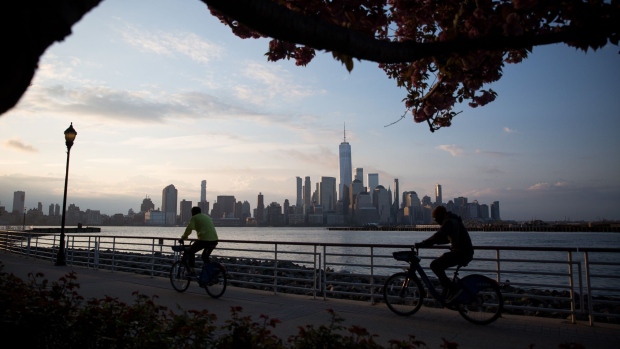 Cyclists pass in front of buildings on the Lower Manhattan skyline along the waterfront in Newport, New Jersey, U.S., on Tuesday, April 21, 2020. Treasury futures ended Tuesday mixed, with front-end yields slightly cheaper on the day and rest of the curve richer, yet off session lows reached during U.S. morning. Photographer: Michael Nagle/Bloomberg , Bloomberg

(Bloomberg) -- Northern Trust Corp. is shutting down a money-market mutual fund after volatility in March spurred redemptions that sent it below a regulatory threshold for maintaining liquidity.

The $1.7 billion Northern Institutional Prime Obligations Portfolio will stop accepting new investments next month and start selling its holdings under a liquidation plan set for July 10, according to a filing Monday. As a prime fund, it can invest in riskier securities than traditional money-market funds, including commercial paper, the term for short-dated bank debt and corporate IOUs.

“The Board of Trustees has determined, after consideration of a number of factors, that it is in the best interests of the Prime Obligations Portfolio and its shareholders that the portfolio be liquidated and terminated,” the company said in its filing with the U.S. Securities and Exchange Commission.

A spokesman for Chicago-based Northern Trust didn’t immediately have a comment.

Prime funds suffered about $150 billion of outflows during the pandemic-fueled market sell-off in March, according to research firm Crane Data LLC, though much of the money has returned since the U.S. Federal Reserve stepped in to backstop the industry. The Northern Trust fund, however, hasn’t recovered roughly $2 billion in assets that left in March, according to data compiled by Bloomberg.

Firms including Goldman Sachs Group Inc. and Bank of New York Mellon Corp. bought billions of dollars of securities from their prime funds when markets seized up, enabling them to stay above a 30% weekly minimum of cash and cash-like securities. Once a money-market fund goes below that level, the board can suspend withdrawals or charge a fee for redeeming, according to rule changes adopted after the last financial crisis.

Northern Trust allowed the prime obligations portfolio to slip below the liquidity threshold, though the fund rose back above it after the Fed said it would provide a backstop.

“This decision is probably a business decision as to whether Northern Trust wants to support the prime fund concept,” said Lance Pan, director of investment research and strategy at Capital Advisors Group in Newton, Massachusetts. “Knowing how institutional shareholders behave, the sponsor may just be deciding not to be on the hook for volatility in terms of asset flows.”