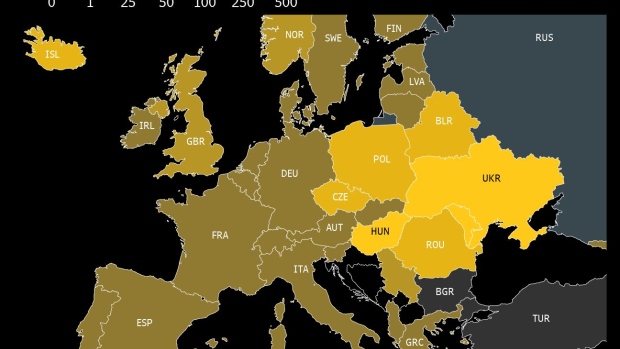 Norway’s central bank raised borrowing costs to the highest level in a decade and signaled a faster pace of future increases than earlier planned in a bid to slow surging inflation.

Norges Bank lifted its benchmark interest rate on Thursday by half a percentage point to 1.75%, as forecast, returning to a level not seen since March 2012. It said the policy rate “will most likely be raised further in September,” without specifying the size of the hike.

The move indicates growing urgency in stemming Norwegian price growth that’s at a 34-year high even after the Nordic nation’s policy makers were among the first in the rich world to start raising rates last September. The second half-point hike in three months echoes the aggressive steps taken by the top global monetary authorities in tightening policy.

“Norges Bank is yet again front-loading its planned rate hikes,” Svenska Handelsbanken economist Marius Gonsholt Hov said in a research note. “We see a clear risk of another double rate hike at the following meeting in September.”

The krone, which has been the best performer in the G-10 space of most traded currencies since July, strengthened following the announcement, trading 0.2% up versus the euro at 9.8616 at 11:09 a.m. in Oslo.

Elsewhere in the region, speculation is building that neighbor Sweden will raise borrowing costs by 75 basis points next month -- mirroring the most recent move by the Federal Reserve. Norway’s Atlantic neighbor Iceland, with the most aggressive policy tightening in western Europe, is also expected to raise its key interest rate by the same margin to 5.5% next week, according to a survey of market participants.

In Norway, there has been growing concern that the fossil fuel-rich economy, which weathered the pandemic better than most, could overheat as the return of demand for services coincides with record sales of its natural gas and oil in Europe, which is suffering an energy crisis after Russian supply cuts.

While jobs and inflation data have exceeded central-bank projections in past months, Governor Ida Wolden Bache needs to strike a cautious balance given an uncertain outlook for housing and spending by households -- some of the world’s most indebted. Still, the policymakers said “a faster rate rise now will reduce the risk of inflation becoming entrenched at a high level and the need for a sharper tightening of monetary policy further out.”

“The rise in prices has been broad-based in recent months and may entail that inflation will remain high for longer than expected earlier,” the statement said in a statement. “This suggests a faster rise in the policy rate than forecast in June.”

Handelbanken’s Gonsholt Hov expects the key rate to peak at 2.75% -- remaining under the level of just over 3% signaled by Norges Bank in June -- citing weaker global growth prospects and lowered international rate expectations, as well as the uncertainty regarding the Norwegian households.

Thursday’s rate decision came at a so-called interim meeting that didn’t include an updated economic outlook or projections for the path of interest rates.

“We believe that Norges Bank will deliver another 50 basis point rate hike in September, before resuming with 25 basis point hikes from November onwards,” Nordea economists Dane Cekov and Kjetil Olsen said in a note to clients. “The top for the key rate in Norway will likely end at around 3%, with the risks balanced.”