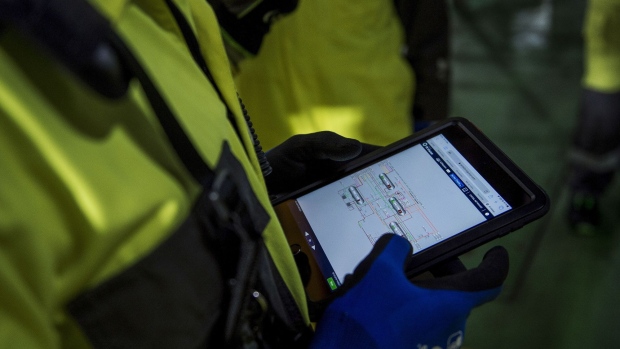 An employee monitors data on a tablet device on a platform on the Johan Sverdrup oil field off the coast of Norway in the North Sea, on Tuesday, Dec. 3, 2019. Sverdrup's earlier-than-expected start in October broke a long trend of underperformance for Norway's overall oil production. Photographer: Carina Johansen/Bloomberg , Bloomberg

(Bloomberg) -- A strike by oil workers in Norway that threatened to have wider ramifications for Europe’s energy supply is heading for resolution after the government proposed a compulsory wage board to tackle the dispute.

“The parties themselves are generally responsible for finding a solution in such instances,” Norway’s Minister of Labour and Social Inclusion Marte Mjos Persen said in a statement Tuesday. “But when the conflict could result in such far-reaching societal impacts for all of Europe, I have no other choice than to intervene in the conflict.”

As a result of the intervention, the trade union Lederne and employer group Norwegian Oil and Gas have agreed to end the strike so that everyone can return to their posts as soon as possible.

A further escalation of the strike could have shut down more than half of Norway’s gas exports, which would have “critical implications” given the energy crisis and the war in Ukraine, Persen said.