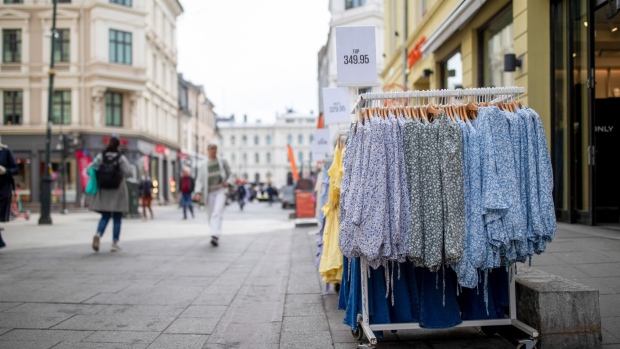 Clothes for sale on Karl Johans Gate, the main shopping street, in Oslo, Norway, on Thursday, May 5, 2022. Norway’s central bank confirmed its plan to deliver a fourth increase in borrowing costs next month and repeated its warning of faster hikes if needed to quell inflation. Photographer: Fredrik Solstad/Bloomberg , Bloomberg

(Bloomberg) -- Norway’s inflation exceeded forecasts for a fourth straight month, hitting a new 34-year high and adding pressure on Norges Bank to deliver a bigger interest rate hike this month than it has flagged earlier.

Consumer prices rose 6.8% in July from a year earlier, the fastest pace since July 1988, according to data from Statistics Norway on Wednesday. Underlying inflation, the measure followed by the central bank, rose to an annual 4.5% -- the highest on record. The median estimate in the analyst poll for core price growth was 3.8%, while Norges Bank had projected a pace of 3.2%.

The data triggered revisions by several banks in their forecasts on Norway’s rate path, with Norges Bank now seen delivering another half-point interest rate hike from 1.25% at its interim meeting next week and possibly also at its September meeting.

While Norwegian policy makers have been among the most aggressive in raising rates among the holders of major currencies, they signaled quarter-point hikes for the rest of the year in June and a further increase to 3% before next summer.

“It gives Norges Bank a clear reason to bring the key rate in Norway faster to a normal level than they indicated in June,” Nordea’s economists Kjetil Olsen and Dane Cekov said in a note to clients, adding a half-point hike “is clearly on the cards after today’s high figure.”

Markets are pricing in half-point hikes in both August and September, according to Nordea.

Price growth was driven by an “unusually strong rise in food price,” Statistics Norway said, while adding the rise in prices was “very broad.” Cost of food and non-alcoholic beverages rose by 7.6% from June.

“A tight labor market and high agricultural prices will keep both underlying inflation and the headline rate way above the Norges Bank’s target for some time,” Michael Tran, assistant economist with Capital Economics, wrote in a note. “We expect the core rate to stay between 3.5% and 4.0% until early 2023.”

A cooling in Norway’s housing market is a factor complicating the task for its central bank as the country’s households hold the world’s biggest debt load, ahead of Denmark and the Netherlands, according to the latest available OECD data.

Across in Denmark, inflation accelerated to an annual 8.7% -- the highest since 1983 -- from 8.2% a month earlier, the national statistics office said on Wednesday.

The higher-than-expected inflation rate will “put a damper on private consumption with real wages currently under massive pressure,” Jes Asmussen, chief economist at Handelsbanken, said in a note. “However, Danes still have high savings, which can act as a buffer, but it’s doubtful whether consumers will decide to spend that.”