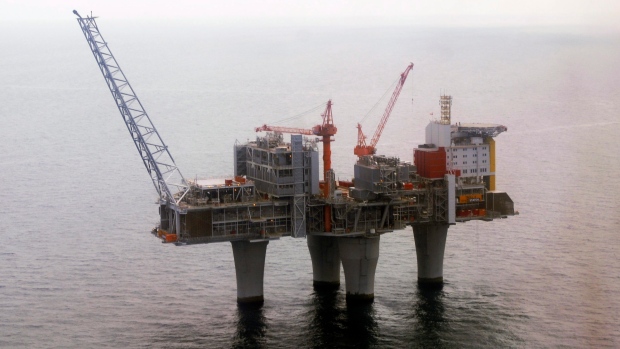 The Troll A, gas platform run by the Norwegian oil giant Statoil company, stands above the North Sea, about 70 kilometers (40 miles) off the coast of Norway, in this file photo dated June 8 2006. , The Canadian Press

Norway is walking away from billions of barrels of oil and natural gas.

To the dismay of the nation’s powerful oil industry and its worker unions, the opposition Labor Party over the weekend decided to shift its stance and will end a push for oil exploration offshore the sensitive Lofoten islands in Norway’s Arctic. That means there’s now a solid majority in parliament to keep the area off limits for drilling.

The dramatic shift is big a blow to the support the oil industry has enjoyed and a signal that the oil era that built the Scandinavian nation into one of the world’s most affluent is nearing an end.

Oil companies led by state-controlled Equinor ASA, the biggest Norwegian producer, have said that gaining access to Lofoten is key if the country wants to maintain production as resources are being depleted. Estimates suggest that 1 billion to 3 billion barrels could be hiding off the archipelago, which is also considered a natural wonder.

“The whole industry is surprised and disappointed,” said Karl Eirik Schjott-Pedersen, head of the Norwegian Oil and Gas Association. “It does not provide the predictability we depend on.”

But Labor’s decision was not a big surprise. Norwegians are starting to question their biggest export and source of wealth amid growing concerns over climate change. Even oil executives had already given up on gaining access to Lofoten, but now the next battle will likely shift to whether drilling should continue in the Barents Sea.

The oil industry also fears that Labor now could be willing -- or forced -- to compromise on other issues the next time it takes the reins of government, such as petroleum taxes or the award of exploration licenses in Norway’s Arctic.

Labor leader Jonas Gahr Store said Labor will continue to be a supporter of the oil industry and continue to back the existing tax system for the industry, which includes exploration refunds.