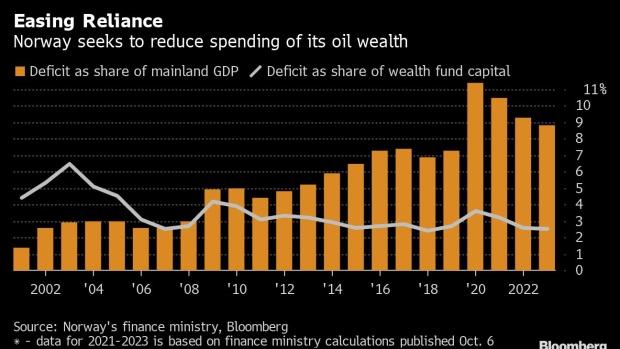 (Bloomberg) -- Norway’s government will rely less on its $1.2 trillion sovereign wealth fund next year as authorities seek to cool the overheated economy and prevent more aggressive tightening by the central bank.

The government has sought to trim spending of the oil wealth to avoid stoking inflation which remains near a 34-year high, and last week introduced new resource taxes that provoked a backlash from the country’s fish-farming industry. The aim is also to bring public finances on a more sustainable path after record withdrawals from the world’s largest wealth fund during the pandemic.

The minority cabinet led by Prime Minister Jonas Gahr Store on Thursday forecast the so-called structural non-oil fiscal deficit will shrink to about 317 billion kroner ($30 billion), or 2.5% of the fund next year, slightly lower than both this year’s level and the central bank’s projection for 2023.

The news suggest net demand for the Norwegian currency will be 45 billion kroner lower next year, “which we think will also contribute to keeping the krone under pressure in the fourth quarter,” Kristoffer Kjaer Lomholt, head of FX and corporate research at Danske Bank A/S, said. The fact that the budget was more contractionary than estimated by the central bank suggests “a slightly lower rate path,” while this is “not a determining factor,” he added.

Norway’s central bank will likely slow the pace of tightening to a 25 basis-point increase in November amid signs that its hikes are beginning to cool the overheated economy. Norges Bank last month projected its key rate to peak at about 3% “in the course of winter,” after delivering its third half-point hike since June, to 2.25%.

While the cabinet faces an increasing funding need of “tens of billions of kroner” next year on areas such as power price subsidies and integration of Ukrainian refugees, it needs to stem over-reliance on the fund at a time its returns are projected to dwindle due to fallout from surging inflation, monetary tightening and geopolitical conflicts.

The government expects growth in the mainland economy to slow to a 1.7% pace next year after 2.9% expansion in 2022. That’s considerably more optimistic than the central bank, which has projected a contraction of 0.3% next year.