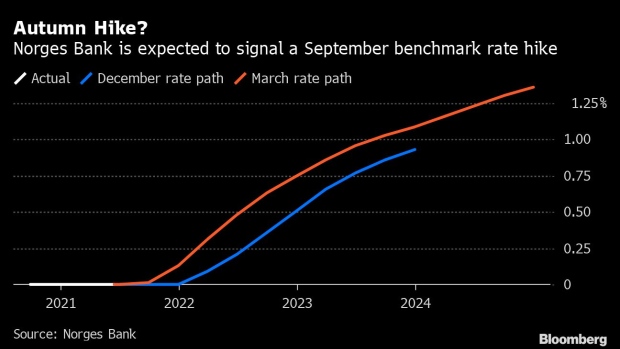 Oystein Olsen, governor of Norway's central bank, also known as Norges Bank, speaks during an interest rates news conference in Oslo, Norway, on Thursday, June 20, 2019. Norges Bank is busy building a reputation as one of the world's most hawkish central banks as it delivers its third interest-rate hike since September and signals there’s more to come. , Bloomberg

(Bloomberg) -- Norway’s central bank is poised this week to cement plans for an increase in borrowing costs that could come in just under 100 days from now.

With output in the richest Nordic economy nearing pre-crisis levels, Norges Bank looks likely to be one of Europe’s first monetary authorities to start tightening after the pandemic. The central bank in Oslo will probably keep its deposit rate at zero on Thursday, but economists are awaiting signals for an increase on Sept. 23, or even sooner.

Norwegian officials already hinted a year ago that they would begin withdrawing stimulus sooner than in other major currency jurisdictions. With the government using the country’s $1.4 trillion sovereign wealth fund -- the world’s biggest -- to aid the economy, the central bank hasn’t had to resort to unconventional tools such as negative rates.

Anticipation of a September rate increase means that speculation for a second hike in December is already building, stoked by an improvement in Norges Bank’s Regional Network report, a key quarterly gauge of economic activity.

Registered unemployment rate fell to 3.5% last month on a seasonally adjusted basis, below the central bank’s forecast, bolstering views of two hikes by year-end at Danske Bank and Nordea Bank, among others. Governor Oystein Olsen said in March it would take 2-3 years to achieve a “normal” policy rate level of between 1.25-1.5%.

While core inflation dropped more than analysts expected last month, the central bank is expected to look through weak price growth driven by the appreciation of the krone.

“We previously forecast liftoff in December, but we have now brought that forward to September. A decline in infections and progress on the government’s vaccination program has allowed for two easing steps in virus measures since mid-April.”

While Norway has ceased offering AstraZeneca Plc vaccinations and has effectively sidelined Johnson & Johnson inoculations, increased shipment plans for other shots have kept on track a plan by health officials to offer jabs to all adults by the end of July.

The economy contracted in the first quarter as virus-related restrictions dented spending, but the government last month moved to the second of a four-stage reopening plan, largely in line with the Norges Bank’s outlook.

Some economists say uncertainties related to the pandemic will force the central bank to strike a more reserved tone about the outlook for rate increases. A virus surge in Oslo earlier this month was linked to traditional high-school celebrations.

“With continued uncertainty related to the Covid-19 pandemic, we believe Norges Bank will remain slightly cautious in its guidance, but a probable shift could be to change the wording from ‘latter half of 2021’ to ‘autumn of 2021’,” SEB’s fixed income strategist Lina Fransson said in a note last week.