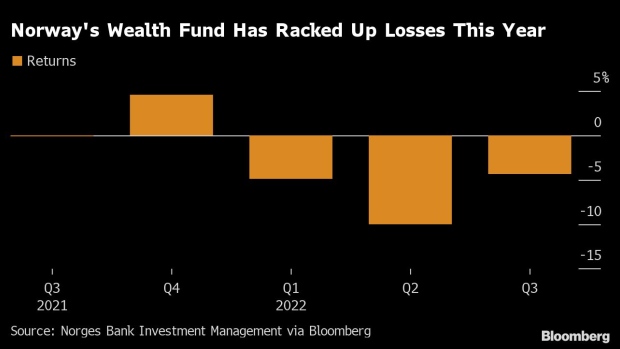 (Bloomberg) -- Nicolai Tangen, the chief of Norway’s $1.3 trillion sovereign wealth fund, wants his traders to bet against the market.

The world’s biggest single owner of publicly traded companies, with roughly 1.3% of all listed stocks, on Thursday outlined a three-year plan to stem losses that have built up in the turbulent markets of 2022, exacerbated by soaring inflation, interest-rate hikes and war in Europe. The wealth fund is — for the first time in its history — looking to a future where investments yield a fraction of what it’s used to seeing.

Tangen, who has repeatedly told his countrymen to brace for “very low returns,” said that means “excess returns are more important than ever before.”

Speaking in an interview on Thursday, Tangen said the key to beating the benchmark will be to “drive the fund to become more long-term, more contrarian and more active on the negative selection.” That means “there’s a lot of stuff we don’t want to have,” he said, without elaborating.

Built from North Sea oil and gas riches, the Oslo-based fund has been warning about a prolonged downturn on the markets after achieving an average return of 6% over the quarter of a century of its existence. It lost 4.4% in the third quarter, equivalent to about $43 billion.

The fund only has one owner, unlike other large asset managers, and is largely an index follower, investing according to a strict mandate from the Finance Ministry. It seeks to make the most of its limited leeway to try to beat the benchmark it is measured against, something it has managed in eight of the last 10 years.

The strategy “plays into this increased geopolitical uncertainty” and partial reversal of globalization, he said, as the wealth fund released its three-year strategy. The plan sets out goals such as investing in companies before they are publicly traded, voting more actively at shareholder meetings, improving collaboration between traders and portfolio managers, and exploiting periods of disruption in real-estate markets.

The fund also needs to be “more operationally robust,” including prepared to withstand cyberattacks, Tangen said. He’s already said openness and transparency are priorities to ensure Norwegians understand why their rainy-day fund isn’t growing as fast as before.

The fund reduced its involvement in initial public offerings last year. In hindsight, it dodged a bullet, having bought into fewer IPOs in “really frothy” markets and seeing those IPOs perform “really badly,” Tangen said. But that’s likely to change as conditions improve, he indicated.

“Exploring that opportunity selectively into the next strategy period is something that we will look into,” said Co-Chief Equities Officer Pedro Furtado Reis. “Doing so allows us to get in early to the company’s life cycle and hopefully with the growth of the company have a greater share of that value creation.”

The fund said it will consider investments in renewable energy storage and transmission going forward, expanding the range of renewable infrastructure it is willing to hold. It spent about €1.4 billion euros ($1.5 billion) on a 50% stake in a Dutch offshore wind farm in 2021, but has yet to add anything more to its renewable energy-infrastructure portfolio.

“It’s competitive,” Tangen said, about the market for wind and solar projects. “There are not that many projects, they’re very competitive and returns are very low. So we just want to increase the space. Generally speaking in the investment world, the more options you can have, the better.”

(Updates with detail in sixth paragraph, comments with CEO in twelfth)