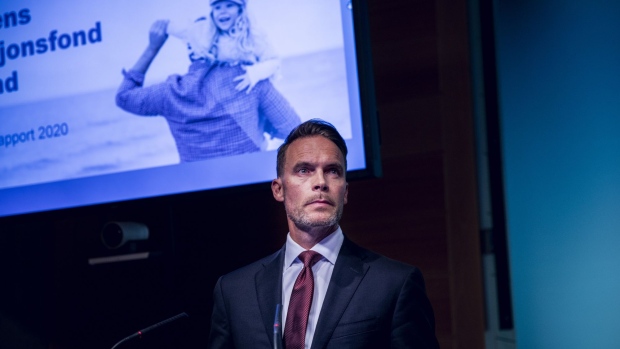 Trond Grande, deputy chief executive officer of Norges Bank Investment Management, pauses during at a news conference in Oslo, Norway, on Tuesday, Aug. 18, 2020. Norway's sovereign wealth fund, the world’s biggest, lost $21 billion in the first half of the year as a rebound in stock markets wasn’t enough to erase its record decline earlier this year. , Bloomberg

(Bloomberg) -- A rebalancing of Norway’s sovereign wealth fund that was triggered back in the first quarter may have helped salvage a 0.1% return in the third quarter.

When the share of equities in the world’s largest wealth fund deviates more than 2 percentage points from its 70% benchmark weight, its required to buy or sell shares to bring it back to the target allocation. With equity markets rising in July and August before selling off in September, it may have been those sales that helped the fund outperform the market. The FTSE Global All Cap index declined 1.5% in the quarter.

“There is a rebalancing mechanism in the fund which says that if we go above a certain threshold in the equity allocation, we will automatically rebalance back toward the strategic target of 70%,” Trond Grande, deputy chief executive officer of the fund, said in an interview. “We confirm that we’re in that territory, so that would be the main explanation.”

The fund had 71.5% invested in equities at the end of the third quarter, with 25.9% in bonds, 2.5% in unlisted real estate and just 0.1% in unlisted renewable energy infrastructure. It owns about 1.5% of all listed companies.