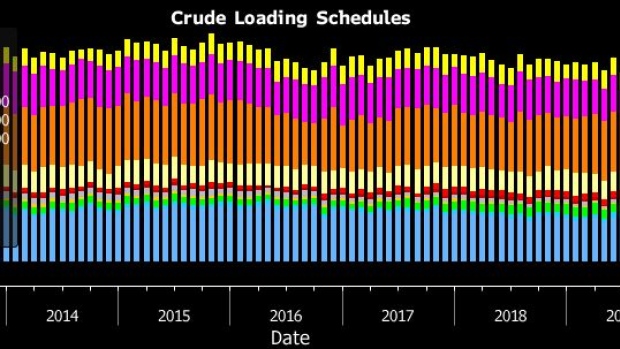 Employees work aboard the Maersk Invincible rig, operated by Maersk Drilling Services A/S, in the Valhall field in the North Sea off the coast of Stavanger, Norway, on Wednesday, Oct. 9, 2019. The boss of Maersk Drilling is in no rush to make acquisitions because he believes a rout in equity prices for offshore drillers has further to go. , Bloomberg

(Bloomberg) -- Norway may not officially be part of the OPEC+ alliance to curb oil supply in the face of the coronavirus pandemic, but next month it looks like the Scandinavian country will do its bit toward helping the producer alliance to avert a global glut of crude.

Norway’s main oil loadings will drop by 261,000 barrels a day in September, according to shipping schedules seen by Bloomberg. The nation’s giant new Johan Sverdrup grade will account for about two-thirds of the slump in cargoes. That makes the country by far the biggest contributor to a month-on-month drop in exports from producers in the Atlantic Basin who have so far released their advance cargo-loading programs.

While Norway isn’t officially participating in production cuts orchestrated by the Organization of Petroleum Exporting Countries and allied nations, it nonetheless pledged to curb output. Johan Sverdrup was expected to bear the brunt of the reductions, although it’s not clear if that’s why September flows are low.

A spokesman for Equinor, which operates the Johan Sverdrup field, declined to comment. The company can store barrels, which means export rates and production levels can diverge.

Along with Nigeria, Angola, the U.K., Azerbaijan and several other producers in the Atlantic Basin, Norway will next month ship a combined 5.73 million barrels a day. That’s the lowest for the nations collectively since at least the start of 2012.

Shipments for September from Russia’s western ports won’t be be released until later this month. Loadings of CPC Blend, a mostly Kazakh grade that’s also shipped from a Russian Black Sea terminal, should be known in the coming days.

Global seaborne flows of crude oil averaged about 40 million barrels a day last year, data from Clarkson Research Services Ltd. show. Including Russia and Kazakhstan, Bloomberg gathers loading-plan information from nations that account for more than a quarter of that.

The big question mark for September is Russia. The country began lifting oil flows from its western ports again this month after cutting them to multi-year lows in July. The full picture of the nation’s September exports should become clear at the end of this month.

On Friday, shipments of Azeri crude from a terminal in Turkey were the latest to be released for September. They will be close to an 11-year low that was set in July.