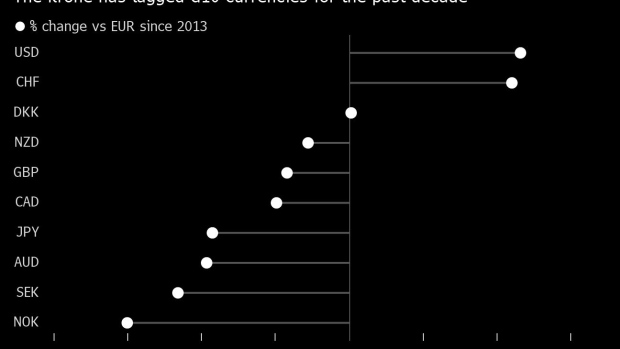 (Bloomberg) -- The immense wealth coming from Norway’s gas and oil fields is underpinning a new refrain among market experts: it’s time for a big rebound in the krone.

Danske Bank A/S and Bank of America Corp. say the currency is a bargain given its decade of losses and the fact that Norway is now reaping trillions of kroner from energy exports. In the past decade, the krone lost about a third of its value against the euro, the biggest decline in the Group-of-10.

According to Morgan Stanley, the Norwegian currency is likely to surge 15% against the dollar this year, delivering the best return among the G-10 peers. Deutsche Bank AG calls it the cheapest currency in the world.

The bullish case has everything to do with Norway’s status as the main supplier of natural gas to the European Union, stepping into a role that was once held by Russia. Norwegian oil and gas exports, which make up more than half of the country’s total exports, surged 130% over the past year.

“The Norwegian krone for the first time in a long while seems undervalued,” said Kristoffer Kjaer Lomholt, a currency strategist at Danske Bank in Copenhagen.

The krone is down 2% against the euro since the start of the year, underperforming all its G-10 peers due to a broad rally in the common currency, while natural gas prices have eased. It recently touched the weakest level since November 2020 and traded around 10.7 per euro on Tuesday.

Danske recommends selling the euro versus the krone if gains in euro-zone equities show signs of petering out. It has a long position in the krone against the Swedish krona.

Strategists are focusing on Norway’s terms of trade, a ratio of export to import prices that serves as a measure of financial strength, which have soared since 2020. Also the nation’s surging exports pushed its trade balance to an all-time high at the end of last year, underscoring its strength in supplying Europe with energy during a time of crisis.

China’s reopening has ramped up speculation that global demand for commodities will pick up this year, while natural gas and other energy sources in Europe are expected to remain well bid given the ongoing war in Ukraine.

At the same time, optimism about growth in Europe is building up, as the region appears to have avoided an energy shortage during the winter months and may sidestep a recession even as euro-zone rates continue to rise aggressively. That should also benefit the Norwegian economy, which is expected to grow 0.8% this year, according to economists surveyed by Bloomberg.

“We still think markets underestimate Norway’s fundamentals and under-appreciate that Norway stands to benefit from the energy reshuffle underway in Europe,” Bank of America strategists led by Michalis Rousakis wrote in a note earlier this month.

The rebound won’t come without challenges. The currency is highly sensitive to risk sentiment and tends to get whipped around by moves in commodity prices and equities. Bank of America says the krone’s bounce will require both the Federal Reserve to pivot and China to reopen successfully from Covid-related restrictions.

Options also suggest a rebound. Three-month risk reversals in the euro-krone have slumped to their lowest level since April, as traders seek protection against a drop in the pair over the coming months.

--With assistance from Ott Ummelas.