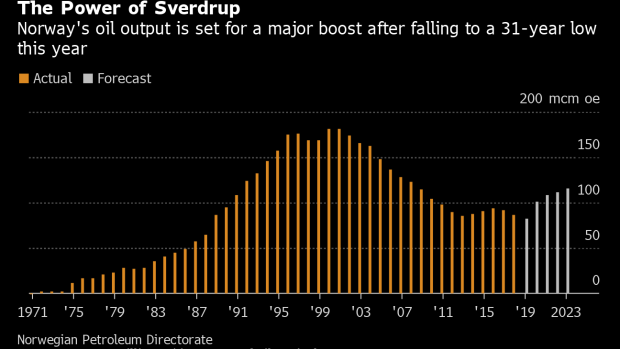 The H-627 barge carrier transports an oil drilling platform onto the world's largest construction vessel, the Pioneering Spirit, in the Bomla fjord near Leirvik, ahead of its transportation to the Johan Sverdrup oil field, Norway, on Friday, June 1, 2018. Equinor ASA has reduced the break-even price to below $20 a barrel in its flagship Johan Sverdrup oil project in the North Sea. Photographer: Carina Johansen/Bloomberg , Bloomberg

(Bloomberg) -- The head of Norway’s oil regulator, who bows out after 12 years of pushing companies to squeeze out every possible barrel from projects, said she’s leaving an industry in good health despite a growing debate over its future.

After all, Norway has just started the Johan Sverdrup oil field, its biggest in decades, which will deliver a huge production boost for the country. And the retreat of most of the big international companies, a concern in some respects, has given way to a new group of producers keen to invest in projects neglected by Big Oil.

“It’s revitalized the Norwegian shelf -- something had to be done,” said Bente Nyland, who will step down as head of the Norwegian Petroleum Directorate at the end of the year. “It was important to get companies in with capital and competence, and who wanted to achieve something.”

Those companies include Aker BP ASA, the result of a merger between a local producer and BP Plc’s Norwegian unit, and Var Energi AS, which last month agreed to buy the rest of Exxon Mobil Corp.’s fields in the Nordic country for $4.5 billion, well beyond analyst estimates.

It was a “good price,” reflecting both the general attractiveness of Norway and the opportunities to develop more resources in that specific portfolio, Nyland said in an interview in her office in Stavanger on Tuesday.

The new top dogs in Norway’s oil industry are dusting off projects that had fallen off BP and Exxon’s radars. Var, which also owns Eni SpA’s legacy Norwegian fields and will now be the country’s biggest operator behind state-controlled giant Equinor ASA, plans to invest $7 billion from 2020 to 2023.

“These are things we’ve been pushing for,” Nyland said. “You can see that these are companies that don’t have to talk to their mother companies about everything they do, and who have Norway as their main base.”

Nyland, a 61-year old geologist, has overseen the oil industry in western Europe’s biggest petroleum-producing nation during a period of upheaval. The U.S. shale revolution reshaped oil markets, leading to a collapse in prices in 2014 that had a bigger economic impact on Norway than the financial crisis a decade ago, and set the scene for the super-majors’ retreat from aging provinces such as the North Sea.

Yet Nyland’s term was also marked from the start by a revival of Norway’s domestic industry. Changes such as a cash refund for the tax value of exploration expenses and the creation of a new licensing round for mature areas produced a surge in drilling and discoveries, including Lundin Petroleum AB and Equinor’s massive Johan Sverdrup discovery, which started producing this month.

Norwegians are now increasingly debating the future of their oil industry amid concerns over climate change, with some politicians arguing for stricter terms for oil companies. Nyland warned against any rash changes to policies that ensure a steady stream of revenue for the country, but welcomed the debate.

Here’s what Nyland said on other topics:

Discoveries early this decade and awards in a previously off-limits area bordering Russian waters stoked optimism among politicians and oil executives about a big, new petroleum province in the Arctic Barents Sea. But disappointing exploration results since then have dampened that enthusiasm.

Nyland, who is from Northern Norway and has a “big heart” for the Barents Sea, acknowledged that there “won’t be a boom” in the regional oil industry there and that there is a risk that oil companies may lose interest if no new finds are made soon. But she still believes that’s possible, and said the NPD is keeping its estimate for undiscovered resources of 16 billion barrels of oil equivalent in the Barents, about two thirds of Norway’s total.

The oil-market rout from 2014 to 2017 forced oil companies to slash costs by streamlining operations and strengthening cooperation with suppliers, Nyland said.

“It’s also kick-started the use of digitalization and automation, a type of technology that’s actually been there for a long time but that got a boost when you started talking about whether you could do things differently,” she said.

Nyland has worked at the NPD since 1989, after starting her career at Equinor, then named Statoil. She’s now “very open” for anything related to interests including petroleum, energy, research and technology, she said.

“But I’m not going to start an oil company,” she said -- a reference to former Petroleum and Energy Minister Ola Borten Moe, who co-founded OKEA ASA a couple of years after leaving office.