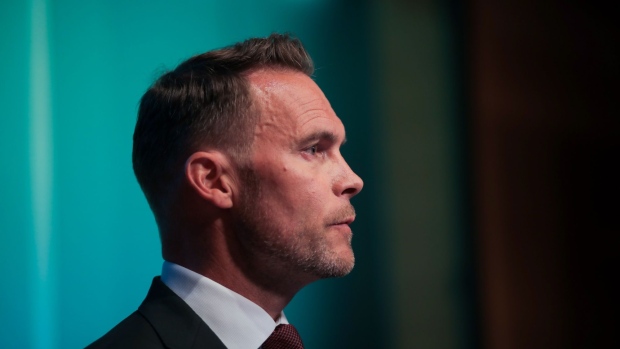 Trond Grande, deputy chief executive officer of Norges Bank Investment Management, speaks at a news conference in Oslo, Norway, on Tuesday, Aug. 18, 2020. Norway's sovereign wealth fund, the world’s biggest, lost $21 billion in the first half of the year as a rebound in stock markets wasn’t enough to erase its record decline earlier this year. , Bloomberg

(Bloomberg) -- Norway’s $1.4 trillion sovereign wealth fund, the world’s biggest, returned 0.1% in the third quarter, equivalent to about $3.7 billion, after its stock portfolio was largely flat in the period.

The Oslo-based fund lost 0.1% on stocks, and gained 0.1% on its fixed-income investments. Its unlisted real estate holdings gained 3.6%. Overall, its total return was 25 basis points higher than that of the benchmark against which it measures itself.

“The equity market continued to strengthen towards August, before dipping slightly in the second half of the quarter,” Deputy CEO Trond Grande said in the statement. “However, the fund has achieved somewhat higher returns than the market, particularly in our equity investments.”

Created in the 1990s to invest Norway’s oil and gas revenues abroad, the fund delved into renewable infrastructure for the first time earlier this year. The move represents a landmark expansion of the list of the fund’s asset classes, which had been limited to stocks, bonds and real estate.