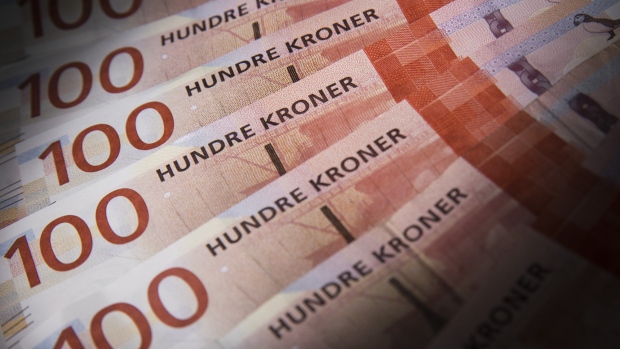 Norway’s central bank reiterated its view that interest rates will remain at the current level in the “coming period,” but said that an historically weak krone poses an inflation risk.

“The upturn in the Norwegian economy is continuing broadly in line with expectations in September. Underlying inflation has been as projected. Global uncertainty persists, and interest rates abroad are very low. At the same time, the weak krone may result in higher inflation ahead,” Governor Oystein Olsen said in a statement on Thursday. The bank kept its benchmark deposit rate at 1.5 per cent, as expected by all economists surveyed by Bloomberg.

The announcement comes as Sweden’s Riksbank signaled it was committing to a December hike that would bring its main rate to 0 per cent.

Norway’s October rate decision was a so-called interim meeting, and the bank didn’t provide new economic forecasts. Policy makers raised rates last month for a fourth time in a year, as Norway breaks away from the pack. In September, Olsen said the bank would keep interest rates “at this level in the coming period.”

Backed by the world’s largest sovereign wealth fund, Norway’s central bank has avoided unconventional monetary policies, including negative rates. Norges Bank has instead adopted a policy of “leaning against the wind,” keeping rates a little higher than economic conditions warrant to prevent a buildup imbalances.

Meanwhile, Norway’s conservative-led government has propped up the economy by plowing historic amounts of the country’s oil wealth back into the economy to support growth. The government plans to spend almost $30 billion of its oil cash next year to cover budget needs.

To contact the reporter on this story: Sveinung Sleire in Oslo at ssleire1@bloomberg.net