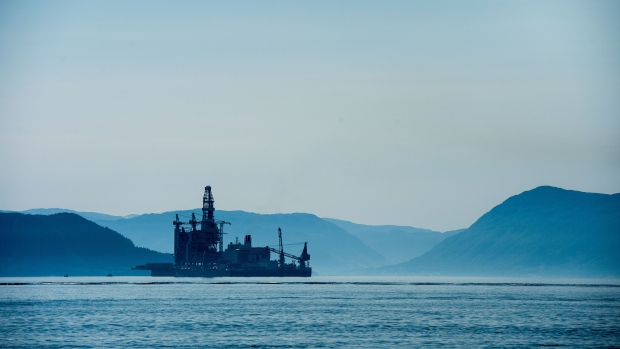 An oil drilling platform sits on board the world's largest construction vessel, the Pioneering Spirit, in the Bomla fjord near Leirvik, ahead of its transportation to the Johan Sverdrup oil field, Norway, on Friday, June 1, 2018. Equinor ASA has reduced the break-even price to below $20 a barrel in its flagship Johan Sverdrup oil project in the North Sea. Photographer: Carina Johansen/Bloomberg , Bloomberg

(Bloomberg) -- Norway’s plan for a full-scale carbon capture and storage project could end up being a financial disaster, according to a new report that includes an increased cost estimate for the venture.

The likely cost of building and operating the project over 10 years could be as 25 billion kroner ($2.6 billion), according to an independent report published by the government on Thursday. That’s 8 billion more than estimated by a previous study, although that only covered five years of operations.

“The measure is considered as costly,” the ministry said in a statement. “There is great uncertainty about the benefits, and the measure could prove to be considerably unprofitable.”

The project under consideration involves capturing carbon dioxide from one or two industrial sites in Norway and then storing it under the North Sea. For it to be profitable, carbon dioxide emissions would need to cost 10 times as much as they do today, according to the latest report. That new study recommends picking only one industrial site, a cement factory, rather than two, in an attempt to reduce costs, it said.

Norway’s minority government will present its recommendation by October, and Parliament will then decide whether to invest in the project. If it does, the Norwegian state would cover about 80% of the cost while companies including Equinor ASA, Total SA and Royal Dutch Shell Plc, which would run the transport and storage side, would fund the rest.