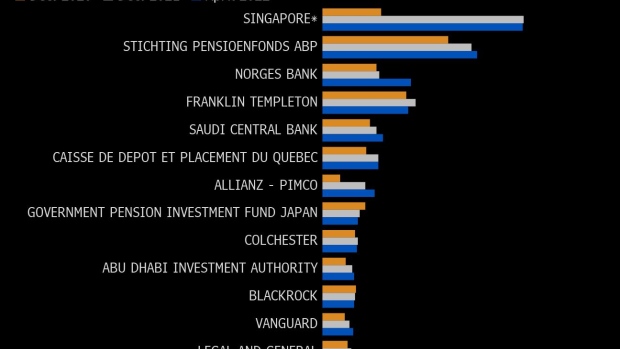 Vehicles on Carrera Septima in Bogota, Colombia, on Saturday, April 9, 2022. Colombia's bustling capital has an ambitious climate plan aiming for a 15% reduction in greenhouse gas emissions by 2024, a 50% reduction by 2030 and carbon neutrality by 2050. , Bloomberg

(Bloomberg) -- Norway’s sovereign wealth fund and Allianz SE increased holdings of Colombian local debt the most so far in 2022 despite a contentious presidential election that may usher in the country’s first leftist government.

Norges Bank made net purchases of 1.96 trillion pesos ($500 million) in the year through April, according to data from the Comptroller General’s office obtained by Bloomberg. Allianz, the Saudi Arabian central bank and Stichting Pensioenfonds ABP of the Netherlands were among others that added to holdings this year.

Singapore, between the monetary authority and government, is now the largest single foreign holder of Colombian local debt after purchases surged since the end of 2020, the data show. The Finance Ministry declined to comment.

“The diversification of Colombian debt is quite high,” Scotiabank Colpatria economist Sergio Olarte said by phone. “A large proportion of foreign debt holders are long-term investors that look far beyond short-term volatility, and that is very positive for the valuation of the debt.”

Polls are indicating that Colombians are keen for a change that could upend its conservative economic model of recent decades. Left-wing senator Gustavo Petro is projected to obtain the most votes on Sunday but will likely have to compete in a June 19 runoff against investor-friendly candidate Federico Gutierrez or anti-establishment wild card Rodolfo Hernandez who is campaigning on an anti-corruption platform.

Investors are alarmed by some of Petro’s more radical proposals including a halt to new oil exploration, an overhaul of the private pension system, a plan to raise around $12 billion by lifting levies on the richest Colombians, and taxing big landowners.

Foreigners, who hold about 25% of Colombia’s local currency debt, have been net buyers of 5.6 trillion pesos this year, according to Finance Ministry data. That’s occurred despite yields jumping to the highest in more than a decade.

Colombian local debt has lost 6.8% so far this year, the only Latin American country in the Bloomberg Emerging Market Local Currency Government Index to post declines.