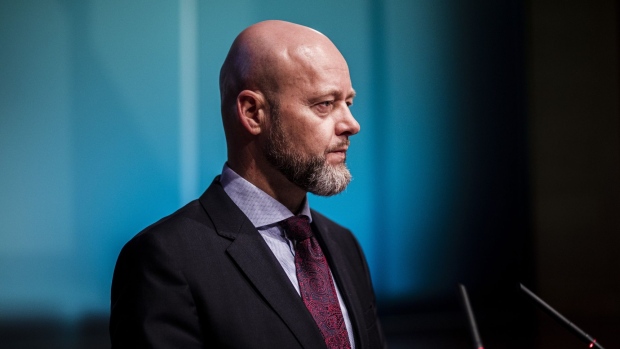 Yngve Slyngstad, chief executive officer of Norges Bank Investment Management, pauses during for a news conference in Oslo, Norway, on Thursday, Feb. 27, 2020. Norway's sovereign wealth fund returned a record $180 billion in 2019 thanks to a rally in stock markets. , Bloomberg

Slyngstad, who was CEO of Norges Bank Investment Management for nearly 13 years, will start March 1, Aker said in a statement on Tuesday. Active asset management, which was announced as a new business area last month, will target establishing funds totaling 100 billion euros ($110 billion) to invest in climate solutions that create value.

The appointment comes after more than a year of transformation at the Norwegian industrial company following a shift in focus toward renewable energy investments. Rokke, who started out as a fisherman, built a more than $5 billion fortune in Norway’s offshore industry. He has now combined his two biggest oil-industry suppliers and spun off the offshore-wind and carbon-capture businesses. He has also moved into Bitcoin, offshore fish farming and private equity.

“In the years to come, good returns for investors will primarily be generated by bringing financial capital closer to industrial expertise,” Slyngstad said in the statement. “We are facing an energy transition that presents enormous investment opportunities,” he said.

The unit will invest in companies through private equity firm OrbeNovo, venture capital companies Clara Venture Labs and Axis, and startup investor RunwayFBU. Aker Asset Management will be an independent company with Aker as the majority owner and Slyngstad owning 5% of the shares.