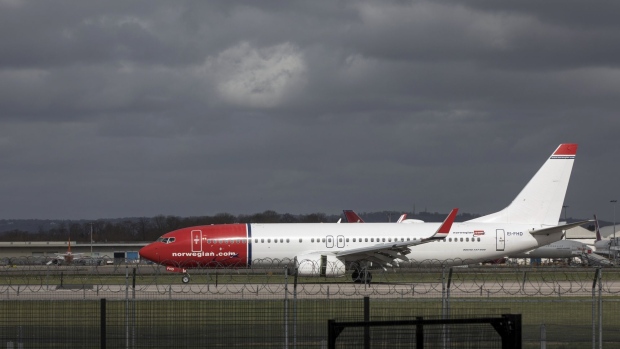 A passenger aircraft, operated by Norwegian Air Shuttle ASA, taxis along the runway at Gatwick Airport in Crawley, U.K., on Friday, Feb. 13, 2020. Norwegian Air is suspending thousands of flights and slashing its workforce in response to the fallout of the coronavirus and the widespread travel restrictions it’s triggered. Photographer: Chris Ratcliffe/Bloomberg , Bloomberg

(Bloomberg) -- Norwegian Air Shuttle ASA’s last-ditch plan to convert debt to equity is gaining traction as some of the distressed carrier’s creditors see no other option to recover at least part of their investment.

Several bondholders and aircraft lessors, speaking on condition of anonymity, said that without a conversion, Norwegian could go bust, wiping out 44.5 billion kroner ($4.3 billion) in debt they hold. Converting it to equity offers the possibility of avoiding a full wipeout, they said, asking not to be identified as deliberations are private.

Bondholders are in the process of hiring advisers, two people said. Noteholders and lessors said they won’t make a decision on whether to accept Norwegian Air’s offer until seeing the conversion rate for each bond and lease agreement based on a valuation report to be distributed before the April 30 bondholder vote.

One holder of convertible bonds, Philippe Sissener, said he’s waiting to hear terms before deciding whether to go along with the plan. Norwegian declined to comment on the discussions beyond its stock exchange filings.

Norwegian Air shares gained 8.1% as of 1:41 p.m. in Oslo on Friday. They remain down 86% this year, after lockdowns and travel restrictions to fight Covid-19 grounded the fleet and ruined the company’s efforts to return to profitability. That’s left it with a market value of about $84 million, well below the list price of one of the Boeing Co. 787 Dreamliners used to ferry travelers across the Atlantic.

Eliminating some of its about $7.5 billion in debt would allow Norwegian Air to meet reduced-leverage requirements for access a state aid package.

Before the coronaviris crisis hit, Norwegian had been cutting costs and reducing capacity to counter years of debt-fueled growth. The carrier is continuing those efforts while focused on gaining the backing of its biggest bondholders and lessors, said a person familiar with the matter.

Lessors that own some of Norwegian’s fleet may also support the carrier by accepting equity as payment for amounts owed, two of the people said. Placing aircraft elsewhere, as they might do in normal times, is extremely difficult because the entire airline industry is struggling to stay afloat. This may make it relatively more attractive to help nurse the airline back to health, they said.

Holders of secured bonds may be better placed compared to convertible noteholders as they could take over the assets if the carrier can’t repay them . Still, with the global aviation industry looking at a slump, security -- including on flight slots at London’s Gatwick airport -- may no longer be worth as much.

Norway’s government last month offered loan guarantees to airlines, including 3 billion kroner for Norwegian Air. But the aid came with strict terms, with the state pointing to Norwegian’s high indebtedness before the crisis, and it called on other stakeholders to pony up.

Norwegian’s debt includes more than $800 million coming due in 2020. After negotiations on the conversion, it plans to put the plan to a vote at an extraordinary general meeting on May 4.

The company is also asking shareholders to approve a private placement of as much as 400 million kroner, which would be the fourth in two years.

(Updates with comment from Norwegian in fourth paragraph, airline efforts in seventh paragraph)