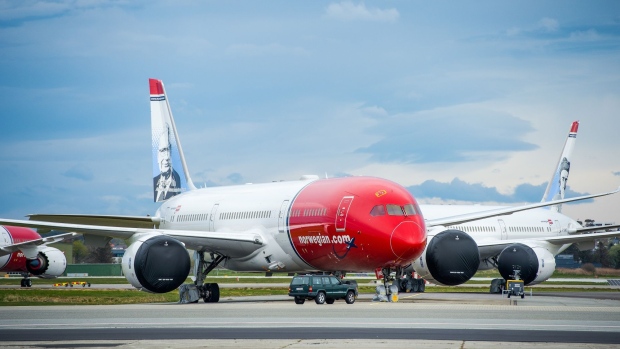 An automobile passes near a passenger aircraft, operated by Norwegian Air Shuttle ASA, grounded at Stavanger Airport in Stavanger, Norway, on Thursday, April 30, 2020. Norwegian, the low-cost carrier fighting to qualify for a bailout, presented a plan to relieve part of its heavy debt burden that would largely wipe out existing shareholders and warned most flights would stay grounded until next year. , Bloomberg

(Bloomberg) -- Norway’s government has agreed to help keep Norwegian Air Shuttle ASA afloat, provided the beleaguered budget carrier can live up to a number of conditions as it fights for survival.

“Norwegian is pleased to announce that the government of Norway has decided to support and contribute to the airline’s funding of new capital, pending certain conditions,” the company said on Thursday. “This move significantly increases Norwegian’s chances of working through the crisis caused by the pandemic and to position itself as a key player within Norwegian and European aviation.”

Shares in the company rose as much as 15% when trading started in Oslo.

Norwegian, like most other airlines, suffered a body blow after the pandemic grounded countless flights and plunged the industry in an historic crisis. The company has already cut thousands of jobs and reduced the scale of its business, most recently abandoning its long-haul model, in an effort to save money.

The government had rejected Norwegian Air’s request for a second multi-billion krone rescue package on Nov. 9, leading the carrier to file for bankruptcy protection less than 10 days later and embark on a restructuring plan. The expression of support from the Norwegian government comes a day ahead of an Irish court hearing as part of the carrier’s examinership process on Friday. The company says that with government support, it is confident of attracting investors and get through the examinership and reconstruction process.

The new business plan “involves strong interventions” in the company’s debt structure and the inflow of as much as 5 billion kroner ($590 million) in fresh capital, which seems a “more robust” plan than the one previously rejected by the government, Trade and Industry Minister Iselin Nybo said in a separate statement. Provided Norwegian lives up to the new strategy, the government “can contribute with a hybrid loan,” she said, adding that the state has “no ambitions to become an owner.”

“With a new business plan, and a participation from the government, we are confident we can attract investors and get through the examinership and reconstruction process,” Chief Executive Officer Jacob Schram said.

“Norwegian has been faced with a very challenging and demanding situation due to the pandemic, and the government’s support significantly increases our chances of raising new capital and getting us through the reconstruction process we are currently in,” he said. “We still have a lot of work ahead of us, but a participation from the government underscores that we are heading in the right direction.”