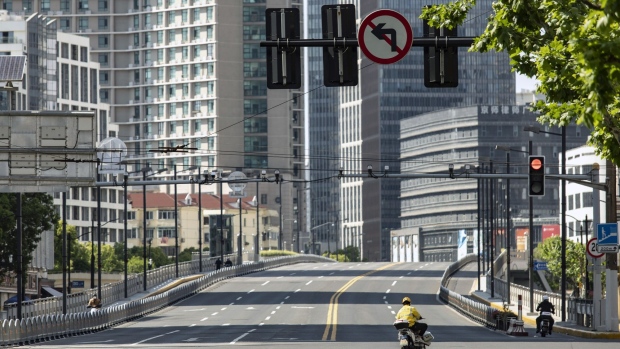 A delivery worker rides a motorcycle along a nearly-empty road during a lockdown due to Covid-19 in Shanghai, China, on Thursday, May 5, 2022. , Bloomberg

(Bloomberg) -- For evidence of just how tight Shanghai’s lockdown has been, consider this: not a single car was sold in the city last month.

The majority of the city’s 25 million residents were mostly confined to their homes or residential compounds in April as part of a sweeping lockdown to stamp out the nation’s worst Covid outbreak since the virus emerged in Wuhan more than two years ago.

Almost all dealerships in the city were closed during the month, the Shanghai Automobile Sales Association said in a statement Monday, when it highlighted the zero sales figure.

In April last year, 26,311 vehicles were sold in the city, according to the association, which represents about 300 companies.

The financial hub is finally on the verge of reaching a goal of three days of zero community transmission of Covid-19, which officials have said is required to start easing the harshest elements of the city’s six-week lockdown. Around 980,000 people remain under the strictest form of lockdown, unable to leave their apartments, while many outside those zones say they’re still confined to residential compounds as authorities seek to meet the zero-spread target.

Passenger throughput at the city’s Pudong International Airport plunged about 99% from a year earlier in April, figures released Monday showed.