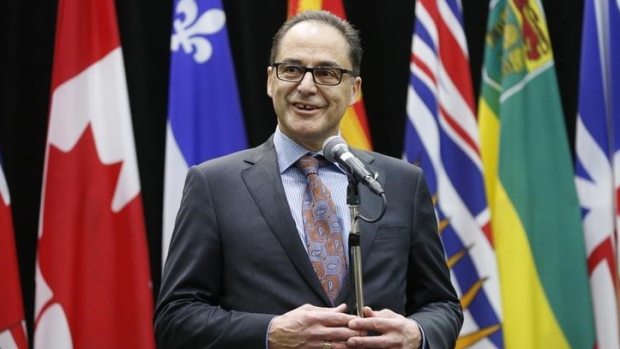 EDMONTON -- Alberta remains on track to rack up a $10.3-billion deficit this year but Finance Minister Joe Ceci says the economy is rebounding and it's time public sector workers step up to help keep it going.

"Alberta is back in the saddle," Ceci said Tuesday as he presented the second-quarter update to the 2017-18 budget.

"Now we have more choices to make – and they will be careful, considered choices about the services Albertans value, about how to return to balance with cuts that are compassionate and investments that will pay off."

The update predicts the Alberta economy will grow four per cent in 2017 –  up from the 2.6 per cent forecast in last spring's budget.

Ceci said more than 70,000 full-time jobs have been added in the last 18 months, most of them in the private sector.

Premier Rachel Notley's NDP government inherited an economy in deep decline in 2015 due to a plunge in oil prices. The government chose to continue spending through the downturn to catch up on an infrastructure deficit and to spur the economy.

The result has been more hospitals, schools, roads and transit lines done or under construction, but there have also been multibillion-dollar budget deficits and a debt total expected to surpass $42 billion next year.

One financial advisor told BNN that while the province’s darkest days may be over, there are still many challenges ahead in the oil and gas sector.

“I think Joe [Ceci] is the chief cheerleader there and I think it’s not all rainbows in that whole sector. So I think some their worst days may be behind them but they’ve still got a tough road ahead to hoe,” Jeff Hull, senior financial advisor at Manulife Securities, told BNN Wednesday. “There’s a lot of problems – a lot of headwinds.”

Ceci said the long-term plan remains to get the budget back in balance by 2023 through cost-cutting and by relying on the economy to continue to grow and diversify.

Credit rating agency DBRS downgraded the province Tuesday to AA from AA (high) with a negative outlook over concerns “that the plan to return to balance relies on a recovery in resource revenues, rather than fundamental adjustments to the budget.” DBRS said as a result of this, debt will continue to rise.

The agency also said there’s not “any real willingness to address the weakest budget outlook among all provinces, despite high levels of per capita spending and the lowest tax burden in the country.”

Greg Clark of the Alberta Party said the NDP hasn't fully committed to saving money or moving off an over-reliance on oil revenues.

"I expected better," said Clark. "I expected that after 44 years (of Progressive Conservatives) we'd finally have a government that would be able to rein in the management and the actual operations of government, and they haven't done that."

Drew Barnes, finance critic for the United Conservatives, said the NDP needs a concrete plan to balance the budget.

Ceci said the government remains committed to belt-tightening and has found $300 million towards its goal of saving $400 million this year in-house.

He said the public sector will be asked to help and pointed to Alberta's teachers who took two years of wage freezes in their last contract in return for development money for classrooms.

"That's what my hope is, we'll be at the table and people will see the benefit of long-term job stability and the fact that (despite) no raises, they would have their ongoing jobs," said Ceci.

The province is now negotiating with a number of public sector groups, including nurses, health-care workers and members of the Alberta Union of Provincial Employees.

Ceci said the government is moving from hiring restraint to a hiring freeze to reduce the size and cost of government by attrition, but said he's focused on "front-line service delivery being kept strong and whole."

The province is also extending by 18 months a salary freeze which began in 2016 for its management and non-union workers.

"Our front lines are already stretched thin as the demand for services increases while staffing levels have remained flat over the past several years," said Smith.

"These short-sighted decisions will cost the province more in the long term because of increased overtime claims, sick time, stress leave and other lost-time claims."

Mike Parker, head of the Health Sciences Association of Alberta, said it's "incompatible" for Ceci to freeze jobs while protecting front line care.

Parker also chastised Ceci for negotiating contracts through the media.

"This is a complex process and anyone involved in bargaining knows that it’s is best done at the table and not in public," said Parker, whose group represents 25,000 health-care workers.