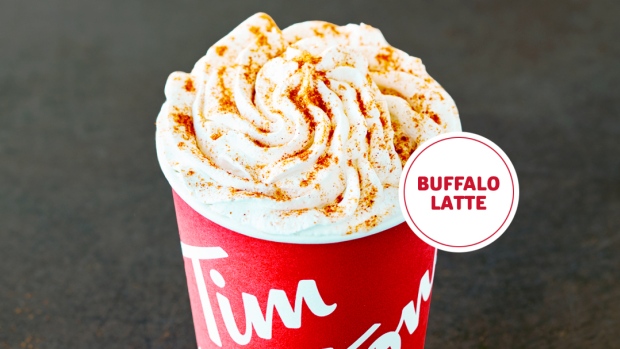 The humble chicken wing no longer has the sole claim to the noble, spicy, vinegary sauce that originated just south of our border more than 50 years ago.

Thanks to Tim Hortons’ latest creation, you can now enjoy Buffalo sauce in drink form — but only in the U.S.

The cafe has introduced the Buffalo Latte which is made with espresso, steamed milk, mocha and “Buffalo sauce flavour” and topped with whipped cream and a “dusting of zesty Buffalo seasoning,” according to the company’s news release.

“Tim Hortons and Buffalo sauce were both born in 1964, so why not take these two Buffalo staples and combine them?” said Stephen Goldstein, regional president of Tim Hortons U.S.

“The unlikely pairing of sweet mocha and tangy Buffalo sauce come together to create an unexpectedly delicious sweet and spicy treat we hope our guests will enjoy,” Goldstein said.

Been on the verge of throwing up for a couple hours now, and Tim Hortons having a "Buffalo Latte" might be what pushes me over the edge.

Me: *orders Buffalo Latte*
Tim Hortons Worker: would you like whipped topping?
Me: Uh can I get bleu cheese?

If you’re hankering to try the concoction, you’ll have to take a road trip stateside — for now, at least, it’s available at only two Tim Hortons locations in Buffalo, New York. The cost starts at US$2.79.

The new beverage follows the company’s release of other flavoured-latte variations including pumpkin spice, vanilla and mocha.

This isn't the first time that Tim Hortons has ventured into novel territory with its menu items. Earlier this year, Tim Hortons released a slate of Canadian-inspired treats at select U.S. stores for the month of July, in the name of Canada 150: the Maple Bacon Iced Capp; the Poutine Donut and the Maple Timbit. No word yet on whether any of these items will ever make their way here.