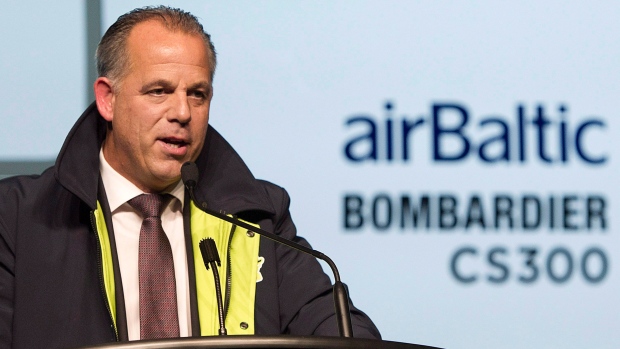 Air Baltic CEO Martin Gauss speaks during a ceremony to mark the first delivery of Bombardier's CS300 to Air Baltic in Mirabel, Que., Monday, November 28, 2016. The largest aircraft ever made by Bombardier is about to carry passengers after being delivered to Air Baltic. , THE CANADIAN PRESS/Graham Hughes

Air Baltic’s CEO says there’s “very deep interest” in Bombardier’s CSeries jets and expects an uptick in global demand for the aircraft, despite the U.S. Department of Commerce’s preliminary decision to slap a 220-per-cent-tariff on CSeries imports.

Martin Gauss, the CEO of Air Baltic, a low-cost Latvian airline, told BNN he has spoken to “a lot more than 10” airlines that have shown interest in the jets.

Gauss said his company plans to buy 14 more jets, adding to its existing order for 20 CSeries, and hopes to close the contract “in the near future.”

“The aircraft is overperforming compared to what it was supposed to do,” Gauss said in an interview Thursday.

“There is nothing able to compete with that aircraft on the economics if we are talking about that size of aircraft.”

Gauss said the U.S. ruling doesn’t change the fact that the CSeries is “the most economic aircraft” in its class.

“We will benefit from it. It has nothing to do with some ruling of some commission somewhere,” he said, in reference to the U.S. Commerce Department. “We are very happy with the aircraft.”