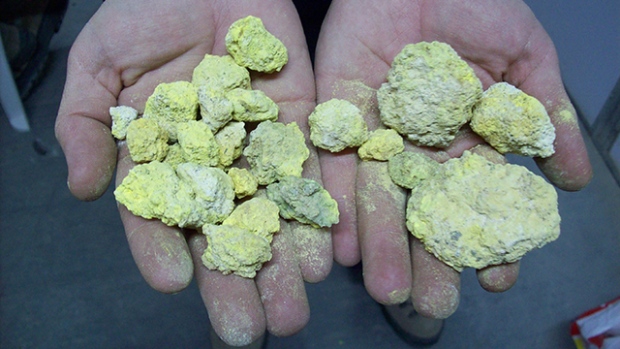 Carnotite, a radioactive, bright-yellow and earthy vanadium mineral that is an important source of uranium. , Image courtesy of Market One Media

A decade ago, Nikolaos Cacos would have been happy to find one good uranium deposit in Argentina's Patagonia region. Now, he's looking at not just a couple of promising properties, but a district-sized deposit of over 4,600-square-kilometres. Better still, the uranium is married to "the beautiful metal" of vanadium, which is fast becoming a key component in a new type of battery that has the potential to revolutionize energy systems.

It's no wonder Cacos and the rest of the management team at the Grosso Group named their uranium-vanadium project company the Blue Sky Uranium Corp. (TSX.V: BSK). The outlook is decidedly sunny.

"We're very excited about it," says Cacos, Blue Sky's President and CEO. "One of our associates referred to it as the 'Saudi Arabia of uranium' because there was really a lot of uranium occurrence in this large area."

Proximity to Argentina's expanding nuclear power program and the soaring price of vanadium, as both a steel hardener and energy storage component, are two other key factors in the company's growth and potential. It's a Patagonian alternative-power one-two-punch predicated on Argentina's need to reduce its reliance on oil imports and greenhouse gas emissions.

"For the longest time, Argentina's government has had a shortage of US dollars, and one of the primary reasons for that is that they need to import oil for energy, and they are looking at uranium as the alternative way to accomplish two things," says Cacos.

"One is to reduce oil imports. The second is to reduce their own greenhouse emissions as a signatory to the Paris Climate Accord. That's why they're encouraging the growth of a uranium industry within Argentina."

Argentina's growing nuclear industry has three power plants and six research reactors currently in operation. Three more nuclear power plants are either in construction or in the planning stages. Currently, all the uranium for those reactors has to be imported, and Argentina is eager to secure a domestic supply.

The heart of Argentina's nascent nuclear reactor industry is in Rio Negro Province in Patagonia, where Blue Sky’s flagship Amarillo Grande Uranium-Vanadium Project is located, positioning it to be the first domestic supplier of uranium to the growing Argentine market.

"The nice thing about the deposits is they occur in what is technically referred to as unconsolidated environment. In layman's terms, that means that basically the ground is like sand, so you don't need to blast to get it out — you just get a big digger in there and remove it," says Cacos.

In more technical terms, the Amarillo Grande deposits can be classified as surficial-type uranium. Similar deposits are found in Langer Heinrich in Namibia, which has proven and probable ore reserves and stock piles totalling 118.87 million pounds and produces approximately four million pounds of U3O8 (uranium oxide) per year.

While uranium spot prices remain low, Cacos believes the conditions for a rebound are good. Besides, with a potential big customer in the Argentinean nuclear program in its backyard, he says Blue Sky is in a position to make a profit even at the current prices.

"First of all, we're working on deposits here that we feel would be economic in this environment, and furthermore, if you look at the prospects for uranium going forward, and at all the forecasts, everything is telling us that this is at the bottom. So, this is an excellent time to be considering uranium," Cacos says.

"When we incorporate the vanadium in there, I think the value will be potentially tremendous."

Vanadium is named after Vanadis, the old Norse name for the Scandinavian goddess of beauty, Freyja. Like the Viking goddess, vanadium is no fragile beauty. It was used to make the famous Damascus steel. Henry Ford used it in the classic Model T car chassis. Currently, it's used as a strengthening agent in structural steel. Recently, the Chinese government mandated an increase in vanadium content in structural steel, which has increased demand.

Couple that with it being a crucial ingredient in revolutionary new mass electricity storage devices like the Vanadium Redox Battery, and it’s little wonder that the spot price for "the beautiful metal" has soared from just under $4 to close to $12. That’s good news for Blue Sky because the Amarillo Grande deposits have high levels of vanadium.

"Certain targets seem to be primarily vanadium. We have drilling underway right now and a program to begin to model this, and shortly to be able to announce the amount of vanadium that is contained in our project."

The presence of vanadium is a beautiful thing for the project's economics, according to analyst Christopher Eccelstone, an analyst for Hallgarten & Company.

"The addition of a potential vanadium by-product stream juices up the economics, and if vanadium shows a sustained rise, then it may actually result in that being the primary income stream, at least at the beginning."

Eccelstone adds that Blue Sky's parent organization, the Grosso Group, is the only North American company that has hung in the Argentine mining space through good times and bad, and that gives them an edge, especially as the country's nuclear program advances.

"The Grosso Group is the only Argentine group dedicated to mining over the long term that combines the internal and external connections necessary to bring a project forward," says Eccelstone.

"As for the nuclear program, as other foreigners gave up the effort, the Grosso group persevered, as it had the local knowledge and perception of the advantages that domestic uranium production would bring the national nuclear policy."

The positive outlook and potential for the project is a testament to the power of persistence and Blue Sky's determination to stick with it over the long haul, despite weak uranium prices. Exploration in Rio Negro province started in 2006, a point in time where there was no identified uranium in the region. After flying over and surveying an area about one quarter of the size of Switzerland, that picture started to change. Patiently, step by step, the company's exploration program identified significant deposits, and slowly, the big picture emerged.

That patience and persistence has put Blue Sky in "a very privileged position" to take advantage of very favourable market conditions emerging in Argentina, says Marino Pieterse, editor of Uranium Mining and an industry analyst.

"It's very important to understand that Argentina is one of the best countries to invest in under the current situation because they are building two new nuclear reactors and they have a pro-uranium mining policy," says Pieterse.

"Argentina is my favorite country of emerging countries to invest in, and Blue Sky Uranium is the only listed company focused on Argentina."

Pieterse says Blue Sky's strong relationship with Argentina as it moves forward with its nuclear energy program, coupled with the presence of vanadium in its properties, has it in a favourable position, especially since, "Argentina is probably the best South America country to invest in right now, and not only regionally, but also on a worldwide scale."

Blue Sky also has an experienced management team. Cacos has over 25 years of management expertise in the mineral exploration industry. Born and raised on the West Coast, he has a Master's Degree in Business Administration and has been with the Grosso Group since its founding in 1993.

Working with Joseph Grosso, President and founder of Grosso Group Management, Cacos has been focused on the exploration and mining sector in Argentina for nearly 25 years. They've brought in team members like Corporate Secretary Darren Urquhart, CA, CFO, a chartered accountant with over 10 years of experience working in both public practice and industry, and Technical Advisor and Director Dr. David Terry, Ph.D, P.Geo, a professional economic geologist, senior executive, and director with more than 25 years of experience in the mineral resources sector.

The Grosso Group has an impressive track-record of successful projects in Argentina, including the Chinchillas silver-lead-zinc project, a joint-venture deal with Silver Standard Resources, the Gualcamayo gold project, which Yamana has in production, along with the world's largest primary silver deposit, Navidad, which Pan American Silver is planning on bringing into production.

With such a well-established presence in Argentina, the Grosso Group and Blue Sky Uranium Corp. (TSXV: BSK) have made it one of their key principles to work closely with local communities in Patagonia and elsewhere.

"One of our key principles is to work very carefully with and to respect the wishes of the local communities, establish a good rapport, and ensure that whatever the outcomes of this project that there is an economic gain for the surrounding community there," says Cacos.