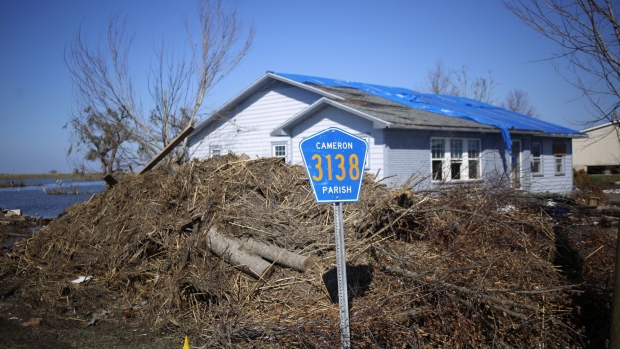 “There’s nothing left,” said Tressie Smith, who ran a seafood restaurant in Cameron before Laura hit. “Even if I wanted to go back, there’s nothing to go back to.” Photographer: Luke Sharrett/Bloomberg , Bloomberg

(Bloomberg) -- On the day after Hurricane Delta cut its ruinous path across southern Louisiana, Dick Frerks pointed to a lone 20-foot pylon rising from the bayou and summed up what he’d lost.

“Our house used to be on top of that,” said Frerks, who makes his living hauling shrimp and crab from the Gulf of Mexico and lives outside the town of Cameron.

Now Cameron and other nearby hamlets have been virtually wiped off the marshy coast by back-to-back hurricanes that leveled homes and swallowed up vast swathes of land. Six weeks ago, it was Hurricane Laura, which demolished the area’s power system, knocked out water service, and flattened buildings. By the time Delta came ashore Friday, there was little left to destroy.

What’s happened to Cameron is a taste of what may be coming for other towns along the Gulf Coast as climate change takes hold. Warmer Gulf water and moister air are the kindling for tropical cyclones, helping to make them more ferocious. The 2020 hurricane season isn’t over, and it’s already produced 25 named storms. That’s the most since 2005, when Hurricane Katrina all but drowned New Orleans. At least seven hurricanes have struck Southwestern Louisiana in the last 20 years, twice as many as the previous two decades.

That’s forcing Frerks and his neighbors to make painful choices about whether to rebuild in a place that’s been battered so many times.

Delta, which slammed ashore with winds powerful enough to knock 18-wheelers on their sides, is the latest in a cascade of natural disasters to rattle the U.S. this year. In California, wildfires have burned an unprecedented 4 million acres, sending smoke as far away as Europe. In the Midwest, a line of violent storms known as a derecho ripped a trail of destruction from Iowa to Indiana in August. And in the Southeast, a record 10 hurricanes or tropical storms have made landfall.

Perhaps nowhere in the U.S. are the impacts of climate change as clear as they are in Cameron.

The town is about 200 miles (322 kilometers) west of New Orleans, sandwiched between the brackish marshes of two national wildlife refuges. It’s perched just 3 feet above sea level, close enough to the Gulf to taste the salt on the breeze. The nearest city, Lake Charles, is an hour’s drive through the bayou.

The area is the epitome of southern Gothic: massive, mossy oaks and marshland littered with rusted boat propellers and populated by alligators. Locals work at oil refineries or on offshore platforms, or operate shrimping boats. When the last census was taken in 2010, Cameron’s population was about 400. By the time Hurricane Delta made landfall, only a handful were left to evacuate.

Even before climate change intensified, southern Louisiana was precarious in the face of storms. A century ago, the Army Corps of Engineers built levees around the Mississippi River, limiting the delta’s ability to constantly rebuild itself through the ebb and flow of sediment-carrying water. That’s allowed the ocean to encroach upon the shoreline.

Closer to Cameron, the degradation has been from oil-and-gas development and dredging of marshes, weakening what was once a natural barrier that could absorb flood waters, and leaving the area vulnerable to new storms.

Consequently, Louisiana has been losing coastal land at an estimated rate of almost a football field every hour. Over the last century it’s lost an area of land mass the size of Delaware.

The state and federal governments and the Army Corps have spent years developing and building coastal restoration projects designed to keep the land intact and the water at bay, many of them running to the tens or even hundreds of millions of dollars.

In May 2019, Louisiana published the most elaborate local climate adaptation strategy in the U.S., offering buyouts to encourage residents to leave increasingly dangerous areas and insisting that industrial facilities are bonded in the event of problems.

Louisiana has one of the highest poverty rates in the country, with a median income 30% below the national average. This devastated stretch of Louisiana’s coast is just the latest example of how global warming has disproportionately affected lower-income populations.

In other parts of the country, similar communities have been left with no choice but to flee the waterfront, clearing the way for wealthier people to build costlier houses that can better withstand storms.

“All disasters tend to impact those that can least afford to have the impacts,” said Trevor Riggen, senior vice president of disaster cycle services for the Red Cross. “The inequity of loss always tends to skew to those that have fewer resources.”

In Cameron, many have already left. From 2000 to 2010 the population shriveled 80%, and it’s continued to decline ever since. But there are holdouts: people so committed to staying that they’ve achieved near-legendary status.

Hubern Doxey’s family has lived in the area for generations -- some working construction, some farming oysters. While he rode out the latest storm in a small town north of Lake Charles, Doxey said he’ll be back, even if there’s nothing left of Cameron.