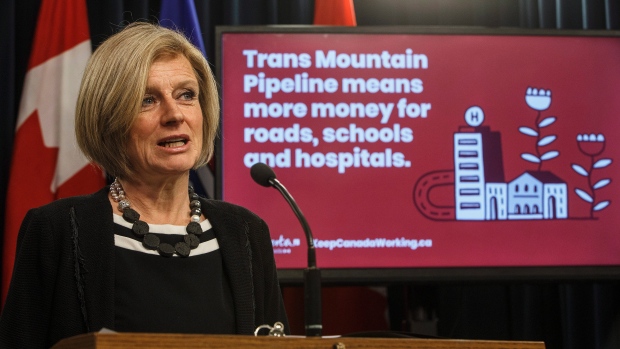 Alberta Premier Rachel Notley unveils an ad they will be running in B.C. about the pipeline expansion in Edmonton, Alta., on Thursday, May 10, 2018. , The Canadian Press

EDMONTON -- Alberta Premier Rachel Notley says she's confident talks aimed at getting construction of the Trans Mountain pipeline expansion back on track will be successful before a May 31 deadline.

Notley says she can't divulge details of talks with Kinder Morgan, but says they are focused on the financial viability of the $7.4-billion project and on getting construction restarted this summer.

"I want to assure Albertans that the discussions are focused on the only outcome that is acceptable to us and to a growing number of people across this country, including a majority in British Columbia, and that is the construction of the Trans Mountain pipeline," Notley said Thursday after revealing a new billboard ad campaign touting the line's benefits.

Last month, Kinder Morgan stopped all non-essential spending on the project and said it wants assurances by the end of this month that the expansion can proceed.

The expansion would triple the amount of oil flowing from Alberta to tankers on the coast, which Alberta says is critical to reducing multimillion-dollar discounts on its product due mainly to pipeline bottlenecks.

The project has faced court challenges and permit delays in B.C. Premier John Horgan's government says it is concerned about the potential for oil spills on its waterways and coastline.

Her government is close to passing legislation that would give Alberta the power to restrict and redirect flows of oil, gasoline and natural gas to maximize profits. It would have the potential to cause gasoline and other fuel-related prices to spike in B.C.

Parties on both sides of the house voted on Wednesday to accept an Alberta Party amendment to put a two-year limit on the bill. The amendment gives the government the option to extend the bill after the two-year limit, but it would need to go back to the legislature for approval.

Energy Minister Marg McCuaig-Boyd told the house that two years is a reasonable time and the amendment doesn't tie the government's hands.

Notley wouldn't say if she will use the new powers ahead of or after the May 31 deadline.

"We do have a very big effective tool at our disposal. B.C. knows this and even more importantly, the federal government knows this," she said. "If we have to we will do whatever is required to get this job done and we will not hesitate. But we must be strategic."

"We are winning hearts and minds in B.C.," she said. "So we must deploy this (bill) with a cool hand, not an angry one."

The bill is getting support from all sides of the house. Opposition United Conservative house leader Jason Nixon said his caucus is fighting to keep the bill on the floor to get it passed sooner.

"We've been trying to pass Bill 12 for a couple of weeks," said Nixon.