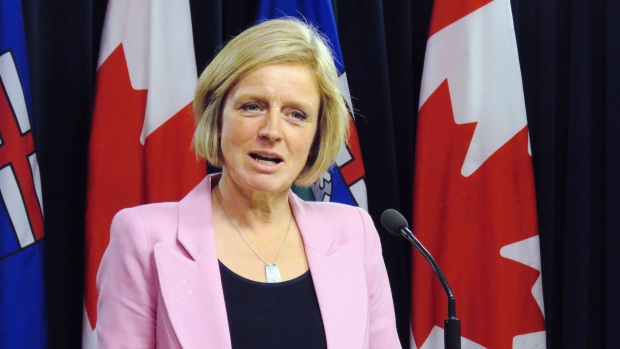 Alberta Premier Rachel Notley announces that she is suspending the province's ban on B.C. wine at the legislature in Edmonton, on Thursday, February 22, 2018. , The Canadian Press

EDMONTON -- Alberta Premier Rachel Notley is threatening to turn off the oil taps in a fight with British Columbia over the Trans Mountain pipeline expansion.

Notley won't say if she would cut off B.C. or the rest of Canada -- or both -- but says her government is ready to pass legislation to make it happen.

"Our key focus is getting people's attention on the matter," Notley told a news conference Thursday prior to the speech from the throne to open the next session of the legislature.

The $7.4-billion pipeline expansion would triple the amount of Alberta crude going from Edmonton to ports and refineries in B.C.

Prime Minister Justin Trudeau's government approved the Kinder Morgan project in 2016, but the pipeline has since faced permit fights and challenges from the B.C. government.

Alberta has already imposed and pulled back on a ban of wine from B.C., but Notley said the government will not stand for further delays and harassment.

She said the project is vital to Alberta and to the rest of Canada, and the country is forgoing thousands of jobs and millions of dollars in lost revenue due to pipeline bottlenecks.

"There are many tools that we also have between our previous wine ban and this tool," said Notley.

"All we are doing is making sure that our tools are at the ready, because it is important for Albertans to understand that we are going to stand up to protect the interests of Albertans on this matter."

Notley said the province is looking at taking action on oil and natural gas.

Each day, Alberta currently exports 44,000 barrels per day of gasoline and 47,000 barrels of diesel to B.C., representing more than 20 per cent of its total production.

Alberta exports 2.4 billion cubic feet per day of marketable natural gas to B.C. per day, representing one quarter of its production. About 17 per cent of those exports are used by B.C., with the rest going to the United States.

Notley's announcement echoes action taken in 1980 by former Alberta premier Peter Lougheed in a showdown with the federal government.

Lougheed announced phased cuts to oil flows amounting to 15 per cent over nine months as well as the cancellation of two large oilsands developments after Pierre Trudeau's Liberals brought in the national energy program with its price controls, new taxes, and revenue sharing.

The two sides brokered a compromise after Lougheed turned off the taps.

"(This) is exactly the strategy I advocated since Day One. And the premier mocked and ridiculed that idea right up until the last few days," said Kenney.

"We're setting the agenda and they're responding."

Notley brought in a ban on B.C. wine in early February after B.C. Premier John Horgan's government announced it would not allow increased oil shipments through the province until it had reviewed oil spill safety.

Notley lifted the ban on Feb. 22 after Horgan said his government would not block extra oil while it asked the courts to determine if B.C. has the authority to take the action it was planning.

Notley and the federal government have stated that the law is clear and Ottawa alone has ultimate jurisdiction on interprovincial pipelines.

Kenney said Notley pulled back too quickly on the wine ban, and said he remains skeptical she will still do what is necessary to get the pipeline built.

"So far this looks like a pro wrestling match between two wings of the NDP, a choreographed fake fight. If they (Notley's government) are really serious about this, they'll back it up with action," he said.