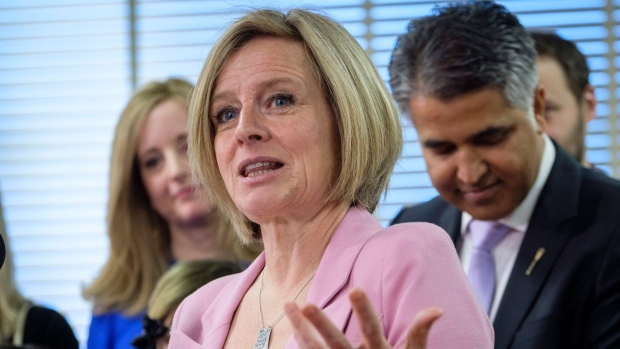 B.C. Premier John Horgan said Thursday he would like to see the federal government step in to deal with high gas prices.

"I would certainly love to see the federal government take some leadership in this regard," Horgan said in Victoria.

"And the Kinder Morgan proposal, as it currently is constructed, will not bring down ... gas prices. It will send diluted bitumen to another jurisdiction."

"I think that there are a lot of ways in which the province of B.C. can assure an adequate supply of gasoline in order to combat the ridiculous prices that they pay," she said Friday in Calgary.

"I think the best way to do that is to allow for the kind of open and smart trade between provinces that would facilitate that and it would include increasing the ability of Alberta to ship more product to the west."

Kinder Morgan Canada's Trans Mountain pipeline expansion would triple the amount of crude flowing from Alberta to a port facility in Burnaby, B.C.

The federal government approved the expansion in 2016 but the project faces significant opposition in B.C. Thousands of people have been rallying to protest the project and Horgan has raised concerns about the pipeline's possible environmental and economic impact.

Horgan has asked for a legal ruling on whether his province can restrict increased amounts of oil from coming into B.C. while his government reviews oil-spill safety measures.

Alberta imposed a short-lived ban on B.C. wine and Notley has suggested she will introduce legislation in the coming weeks to give her the power to curtail oil shipments to B.C. in retaliation.

Notley also slammed the B.C. government for a plan to offer tax incentives, including relief from the provincial sales tax, for construction of liquefied natural gas projects.

Horgan announced the proposed subsidies ahead of a final investment decision on LNG Canada's $40-billion project which would include building a natural gas pipeline from northeast B.C. to a new terminal on the coast.

The B.C. government has shown it's possible to balance environmental responsibility with economic prosperity, Notley said.

"They discovered that with LNG and I would suggest they apply the same lens to the work that we're trying to do with Kinder Morgan."